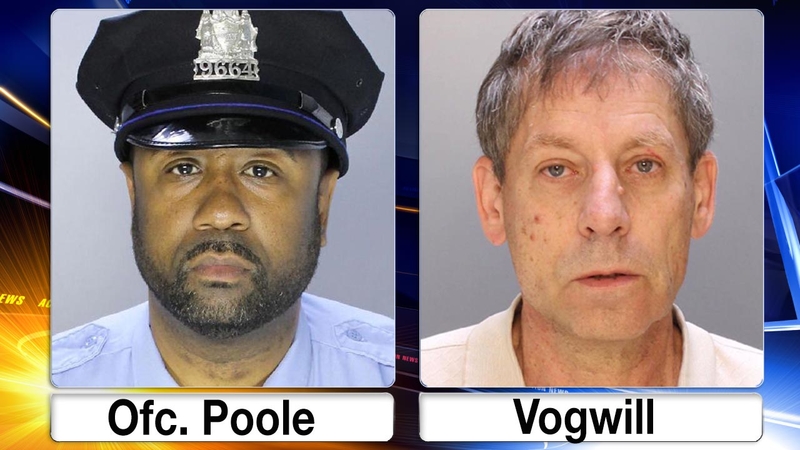 NORTHEAST PHILADELPHIA (WPVI) -- Vehicular homicide and DUI charges have been filed against a 59-year-old Philadelphia man who police say struck and killed an off-duty Philadelphia officer then fled the scene.

The deadly crash happened Sunday at 4:10 p.m. as 12th District officer Lamar Poole, who was off-duty at the time, was riding his motorcycle on Roosevelt Boulevard in Northeast Philadelphia.

Investigators say Poole was crossing the boulevard on Devereaux Street when Vogwill, traveling in the opposite direction on Devereaux, made a left turn into the path of Poole's motorcycle.

Police say Vogwill got out of his vehicle, saw the crash, then tried to get away.

He didn't get far. His Toyota Corolla was stopped by tow truck driver Dwight Williams less than a mile from the crash near Harbison Avenue and the boulevard.

"Fortunately, we had a couple of witnesses - one being a tow truck driver who followed the vehicle, really helped out big time, followed the car, pinned the car in, called the police. Police got there and made the arrest for leaving the scene of an accident," Philadelphia Police Captain John Wilczynski said.

The officer is identified as 42-year-old Lamar Poole of the 12th District, an 18-year veteran of the force. He is survived by his wife and seven children.

Authorities say Vogwill was driving under the influence.

"To be so cavalier about life - how are you going to do that? You've had the accident. Deal with the consequences, but don't walk away from somebody who was fatally wounded in this case," Philadelphia Deputy Commissioner Richard Ross said.

He is survived by his wife and seven children.

Those who worked with him say he had kindness in his heart.

Captain John Moroney from the 12th District tells us, "He was an excellent officer. He was probably an even better person. If I were to describe him I would just say he was just a true gentleman. He was a very nice guy."

The mood was somber inside the 12th District today where Officer Poole worked. Grief counselors were made available.

Captain Moroney says, "Everyone knows that we gotta come in, we still gotta keep going forward no matter what. And I know they are out there heavy hearted today, but they're out there in the community helping people."

This comes eight days after another off-duty Philadelphia police officer was killed in a crash.