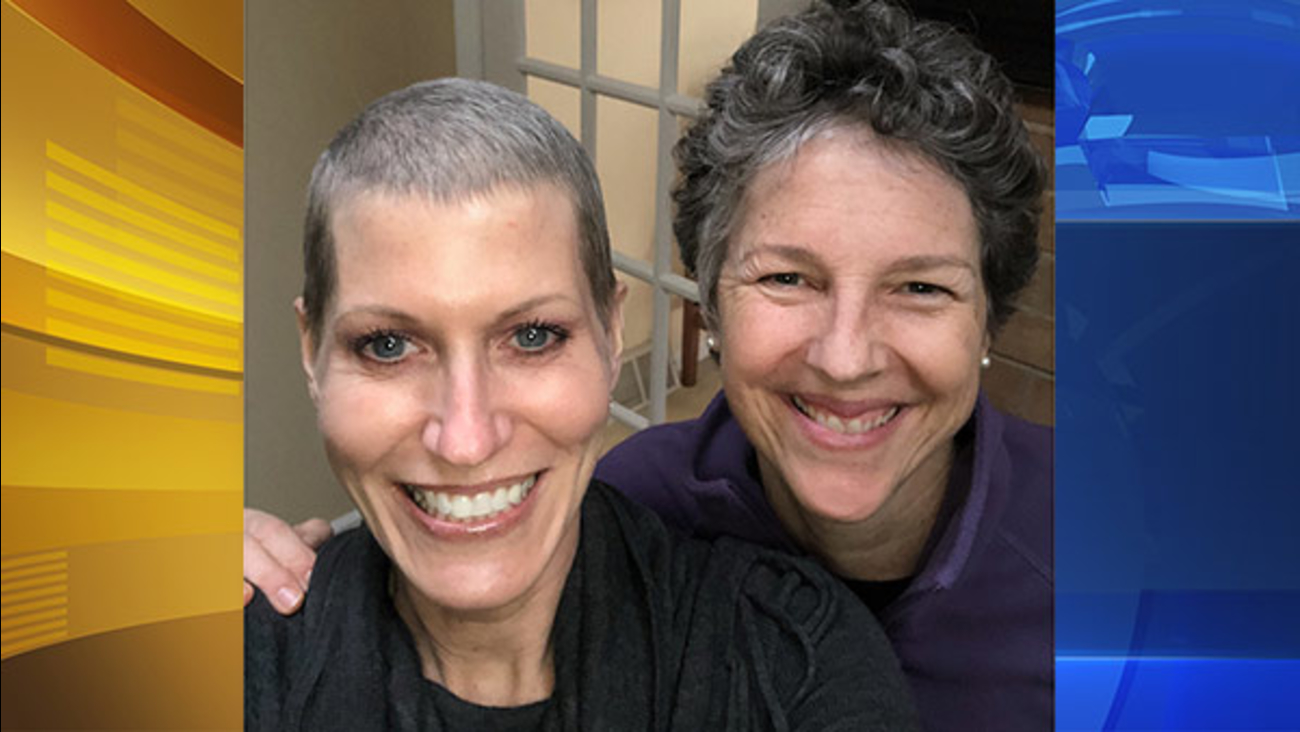 MALVERN, Pa. (WPVI) -- Brooke Nicklas and Michelle McGee first became friends when their sons were in first grade together.

They couldn't have guessed the uncanny parallels their lives would take nearly 15 years later, including an ovarian cancer diagnosis barely a year apart.

In July 2016, Brooke went to the doctor after not feeling right.

"I know my body, and I knew SOMETHING was wrong," she says.

She felt bloated, nauseous, felt full after just a few bites of food. After her third visit, when routine ailments were ruled out, Brooke was sent for a CT scan.

She was shocked when it revealed a 9 centimeter (4 inch) tumor on her left ovary.

Suddenly, she was a cancer patient, Stage 1A.

During 6 rounds of chemo over the coming months, Michelle helped her friend by taking part in a "meal train," a crowd-sourced program to provide home-cooked meals for the whole Nicklas family, no matter how Brooke felt that day.

Michelle also made sure her 20-year-old son Nick checked in often with his longtime friend, Brooke's son Dylan, offering his help or just being there to listen.

Last April, with Brooke thrilled to have her treatment behind her, the two women took part in the Sandy Sprint, a 5K or 10K walk/run organized by the Sandy Rollman Ovarian Cancer Foundation's walk.

Family and friends joined them in raising funds in Brooke's name for research.

But these friends weren't done with ovarian cancer yet.

In August, while Michelle was back-to-school shopping with her kids, abdominal pain took over.

"I thought my appendix was about to burst," Michelle recalls vividly.

Before she knew it, she was in the hospital and undergoing tests.

They found a 10-centimeter tumor on Michelle's right ovary, almost the same size as her dear friend Brooke's.

And it was Stage 1C. However, Michelle also had Stage 1A endometrial cancer.

"I never do anything simple," Michelle chuckles a little sarcastically, adding that the tumor began to shift, and soon, she was undergoing emergency surgery.

Brooke became her friend's guide, navigating her through similar treatment with the same medical team she had.

And this time, Dylan was Nick's support, texting and calling almost every day, despite living hundreds of miles apart.

For this year's Sandy Sprint, being held Saturday, April 21, at the Philadelphia Museum of Art, the ladies' team, Believers, is more than 50 members and growing.

Their children have been sharing information on Facebook, inviting friends and acquaintances to come or donate.

They are passionate about finding better ways to diagnose, treat, and ultimately cure ovarian cancer.

"We were lucky," says Michelle, about their early diagnosis. Most ovarian tumors aren't found till they are much more advanced.

"But we both have daughters, and I'm scared to death," continues Michelle, worried that tests to find early-stage tumors won't be available soon.

"There are 3 new treatments and several more in the pipeline. We have to keep that momentum going," says Cohen.

"And we are seeing younger and younger women develop it," she adds.

Brooke has serious advice for all women, "Know your body; don't ignore anything!"

The Sandy Sprint invites everyone to come dressed as your favorite superhero - and bring your dog, too!

Dogs are welcomed to the event.