Hanging up on an era: Last public pay phone in New York City removed from streets

Some 6,000 phone booths were removed during the transition to LinkNYC Wi-Fi kiosks.
WPVI
By Rolando Pujol 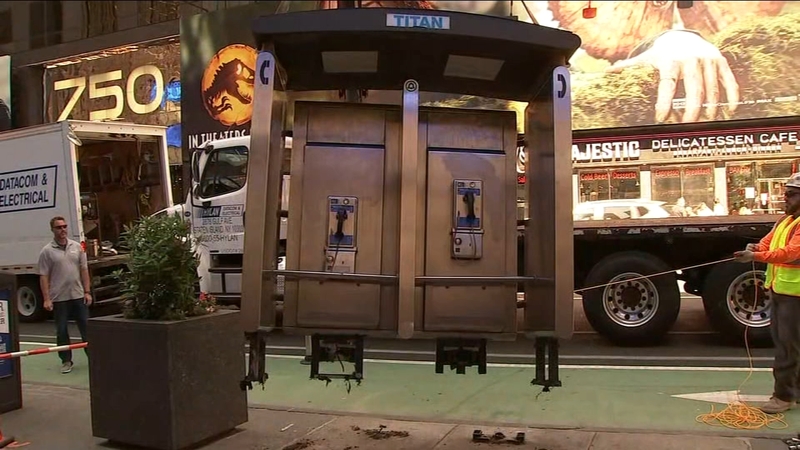 NEW YORK -- Once, not so long ago, pay phones were a common sight all around New York City, and they had been for over a century. But then came cellular phones in the late 1990s, and the number of public phones began to decline. And later, smartphones like the iPhone arrived. And pay phones kept disappearing.

Even Verizon -- the legacy New York phone-service provider once known variously as New York Telephone, NYNEX and Bell Atlantic -- years ago got out of the pay-phone business, those coin bank holders no longer overflowing.

And finally, on Monday, the inevitable happened. The last public pay phone, still featuring the classic Bell System logo, was unplugged from the streets of New York City, on Seventh Avenue and West 50th Street in Midtown Manhattan.

"What a beautiful day to be here to celebrate the end of what used to be the primary lifeline service for many New Yorkers," said Matthew Fraser, New York City's chief technology officer.

The decades-long slow death of the pay phone accelerated in 2015, when the city, along with its telecom partner, the consortium known as CityBridge, began to install LinkNYC kiosks, which offer free Wi-Fi, free phone calls -- an average of 425,000 calls are made per month -- device charging and many other services.

You soon won't be able to use that old BlackBerry phone sitting at the bottom of your drawer somewhere.

Some 6,000 phones were removed during the transition to LinkNYC, of which about 2,000 are now on city streets and thousands more are on the way, "prioritizing equity areas with particular need, including the outer boroughs, Manhattan above 96th Street and communities that lack internet access," the city said in a statement.

The city heralds LinkNYC as "the largest and fastest free public Wi-Fi, network with thousands of Links deployed citywide," and will continue to invest in the technology they carry, including the imminent installation of kiosks offering 5G service, known as Link5G.

Mark Levine, the Manhattan borough president, was not feeling particularly nostalgic for pay phones at the ceremonial removal of the last one Monday morning. He remembered the days of finding phones with no dial tone, fishing in pockets for quarters or standing in line just to make a call.

"We all suffered equally," Levine said of the pay-phone era. Now, in the smartphone era, those who can't afford one or don't have access to high-speed internet or unlimited data can tap the signal from the Wi-Fi, kiosks, Levine said.
That's progress, of course, but for nostalgic souls who appreciate the role pay phones played in street life, all hope is not lost.

They linger in part because of the efforts of Alan Flacks, an Upper West Side resident who advocated for the preservation of the classic phone booths, arguing that they are not only symbolic icons but practical ones, as you never know when you'll need a pay phone.

"Phone booths are much better for privacy, protection from the elements, and they have a little shelf so you can write things down. As a rule of thumb, they also reduce the ambient decibels by about half," Flacks told amNewYork in 2007.