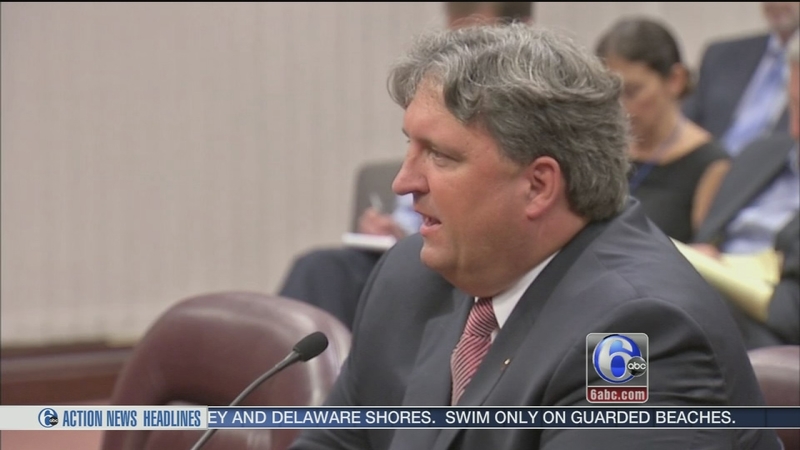 HARRISBURG, Pa. (WPVI) -- Pennsylvania lawmakers made a hasty return to the state Capitol from their summer recess on Tuesday as they rushed through a replacement for the state's convicted ex-attorney general.

The unanimous confirmation vote on Bruce Beemer comes less than two weeks after Democratic Gov. Tom Wolf nominated him to head an office racked by infighting and scandal under Kathleen Kane.

Beemer was sworn in privately in Wolf's offices, with Wolf in attendance. Under Senate rules, senators were required to wait until at least Sunday to vote on Beemer's nomination. Senators reconvened and voted with little fanfare in an effort to close an ugly chapter for the state's top law enforcement office.

Beemer told senators he hopes to restore a sense of honor and integrity to Pennsylvania's top law enforcement office. Work must be done to restore the office's credibility with the public and other law enforcement agencies, as well as improving morale, Beemer said.

"It's going to be a challenge, but I look forward to do doing that each and every day," Beemer told reporters. "It's going to be sort of like putting building blocks one on top of each other. Every day we're going to try to make things a little bit better."

In a statement, Wolf said Beemer has the experience and skillset to begin healing the attorney general's office, and he is trusted by its rank-and-file employees and understands "better than anyone what must be fixed to restore the public trust."

One hot-button issue awaiting Beemer is a report commissioned by Kane on a trove of pornographic or offensive emails culled from the agency's servers.

It is perhaps the final act in a scandal that has roiled Pennsylvania's law enforcement and legal communities for two years and felled several top state officials, including two state Supreme Court justices. Kane had released some hundreds of emails her office discovered, but apparently not all.

Beemer would not say whether he would release the report publicly, saying he had not seen it and that people named in it must be afforded due process. But state Sen. Judy Schwank, D-Berks, took to the Senate floor to urge Beemer to deal directly with the "misogynistic, homophobic, bigoted and pornographic emails" and ensure that such a culture cannot exist again in the office.

Kane was convicted of abusing the powers of the state's top law enforcement office by leaking secret grand jury information to smear a rival and lying under oath to cover it up. She resigned Aug. 17, two days after her conviction, and faces prison time.

Beemer, the former top deputy to Kane, was promoted into the post by Kane, but he later clashed publicly with her and provided testimony that helped prosecutors to convict her.

He is expected to fill the remaining five months of Kane's term until a successor picked by voters in the November election is sworn in Jan. 17.

Beemer, 47, took on some of the office's major legal decisions and openly confronted Kane over the agency's operations after the state Supreme Court suspended her law license last fall.

He also gave unflattering testimony about Kane at her trial earlier this month, including the contention that Kane told him it was "no big deal" when he told her a 2014 article in the Philadelphia Daily News contained information he deemed to be protected by investigation secrecy laws.