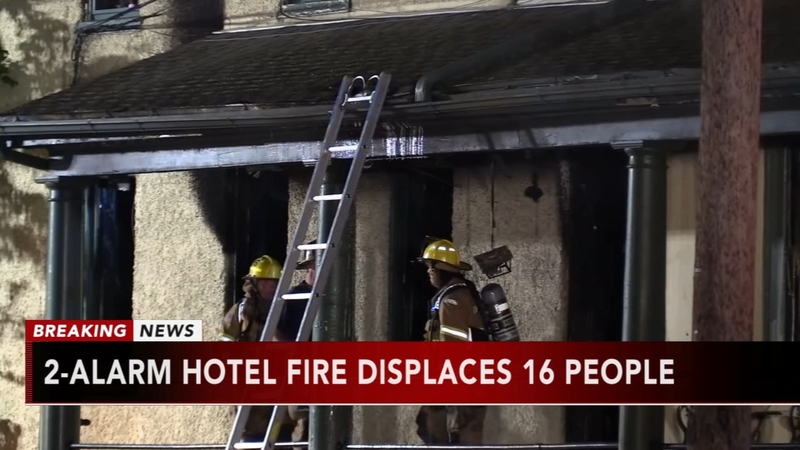 It happened at the Richlandtown Inn on the 100 block of South Main Street shortly after midnight Tuesday.

Cell phone video obtained by Action News shows flames pouring from the windows of the inn.

Arriving crews saw thick flames in the back of the inn. They were told several people were trapped upstairs.

"They were on the third floor," said Richlandtown Fire Co. Assistant Chief Justin Sutton. "And it was just so filled with smoke, it was disorienting for anyone in there. It was pretty much a maze at that point."

Firefighters rescued the trapped residents while crews worked to bring the fire under control. That took about 15 minutes.

The flames were mainly contained to the first floor, but there is now smoke damage throughout the building.

"It was a fast-moving fire with old construction," said Sutton. "The wood was super dry, so it does move fast. But like I said, crews did one heck of a job to get there and got it contained."

The fire was mainly contained to the first floor and a restaurant. Two firefighters suffered minor injuries but were able to return to work.

The American Red Cross opened a shelter at nearby Benner Memorial Hall.

"We're proving cots, blankets, some food, water, drinks," said Red Cross spokesperson Kristopher Dumshat. "We're going to be working with them throughout the day to find everybody a place to stay."

The owner, Venanzio Poccia, said he is grateful no one was badly hurt. He is now assessing the extent of the damage.

"Being here 18 years... there are things of sentimental value here that are irreplaceable," he said.

Though the inn is considered a hotel, most of the people who stay there are permanent residents.

The hotel is a historic building in Richlandtown. It was built in 1812 and originally served as a stagecoach stop between Philadelphia to Bethlehem.

It has had different names and uses over the years.

Now the building houses a restaurant on the first floor that closed right after Easter for renovations and a hotel upstairs, with 16 extended stay residents.

Poccia told us the building was outfitted with hardwired smoke detectors.