State police wake up drivers during I-78 traffic nightmare 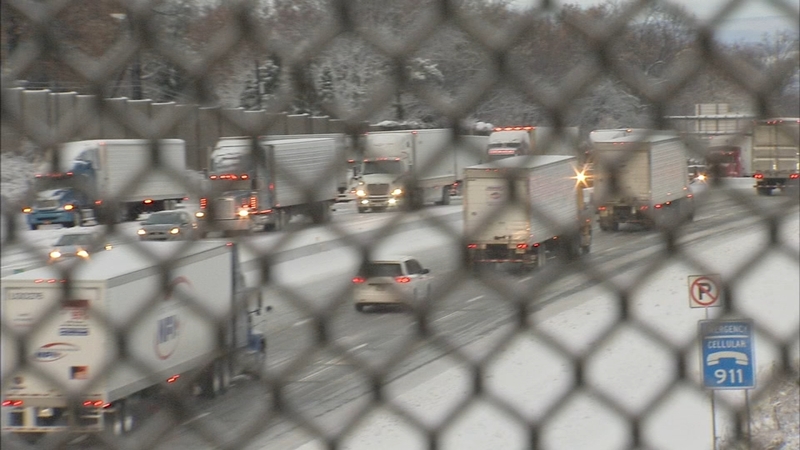 Traffic nightmare on I-78

ALLENTOWN, Pa. (WPVI) -- Roadways were mostly clear of both snow and congested traffic during the Friday morning commute. It was a considerable difference compared to Thursday night's nightmare for thousands of drivers.

PennDOT traffic cams showed areas of gridlock overnight along a nearly 30 mile stretch of I-78 between the Easton/Northampton County all the way to Foglesville, Lehigh County.

Early Friday morning, state police had to wake up truck drivers who had dosed off in what became a parking lot on the interstate.

Drivers grew frustrated as many sat for six, 10, and even 12 hours. Many blamed the snow covered roads and slippery conditions on PennDOT.

"There is something broke. There's a disconnect somewhere between maintenance and the people who are running maintenance," Keith Llewelyn of Blakesly, Pa. said.

PennDOT says an unexpected amount of snow fell in a short period of time and clogged up roadways making it nearly impossible for plow truck drivers to do their jobs.

"Everyone went to work and wasn't expecting it and they were all on the roadways and unfortunately it just clogged our roadways and really did make it impossible for a lot of our plows to be able to work," a PennDOT spokesman said.

State troopers waking up drivers on I-78. Matt O'Donnell reports during Action News Mornings on November 16, 2018.

As Action News reporter Jeannette Reyes was speaking about the traffic conditions, a round of thundersnow hit the area. Action News quickly stopped the live report, until it was safe again for the news van to operate.

On Friday afternoon, PennDOT still had plow trucks deployed across the region cleaning up some of the roadways after the morning snowfall.

They say moving forward they advise drivers to go on 511pa.com so that they can stay updated on road conditions around the clock before they head out.