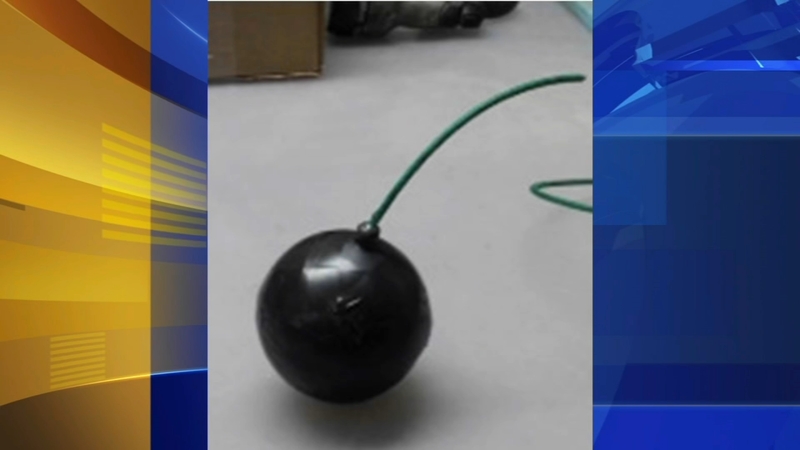 MILFORD TWP., Pa. (WPVI) -- Residents in one part of Bucks County are being warned that there could still be live explosives scattered around the area.

The warning comes amid the investigation into a series of mysterious explosions earlier this year.

"This is more of an FYI than an SOS," Bucks County District Attorney Matthew Weintraub said in a statement.

He said the warning came in light of some developments in the ongoing investigation.

Bucks County residents warned of possible live explosives. See images of what some of those devices could look like.

Weintraub urged residents to be cautious.

"If you find something suspicious, please do not investigate it on your own. Call 911," he said. "We don't want somebody to unintentionally come across one of these devices and pick it up or try to manipulate it or do some kind of search and rescue mission themselves, rather we'd ask them to call 911."

Weintraub said it is possible that devices that look like others recovered in the case could still be out there: one that resembled a cartoonish round bomb with a wick, others contained in white plastic bottles with wicks sticking out of the top and some in dark colored bottles with labels and a wick.

David Surman Jr. and Tina May Smith of Milford Township have been under investigation in relation to some 30 explosions in upper Bucks County.

Smith was arrested on Friday. Officials say she helped Surman, her longtime boyfriend, distribute and detonate the homemade explosives that accounted for a rash of blasts in a rural part of Bucks County, starting in early April.

Surman was arrested in June after a raid on his home and nearby chemical company turned up improvised explosive devices. He was released from jail after posting 10 percent of his $750,000 bail.

Surman is facing charges of possessing a weapon of mass destruction, reckless endangerment, and other offenses.

He was also charged with child pornography offenses after a search of his computer during the investigation, authorities said. He was rearrested on those charges and was released again after he posted 10 percent of $500,000 bail.

Tina May Smith was being held on $1 million bail.

She, too, managed to make bail. Both are free awaiting their next appearance in court.

A trial date has not been set at this time.