Overcrowding on Mt. Everest may be linked to recent deaths, says local climber 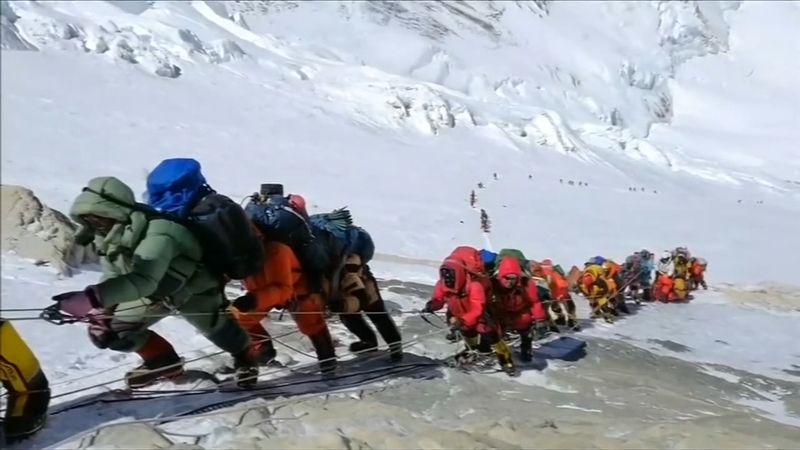 Overcrowding on Mt. Everest may be linked to recent deaths

YARDLEY, Pa. (WPVI) -- Werner Berger of Yardley holds the world record as the oldest person to have climbed the highest mountain on each continent.

He admits, though, that climbing Mount Everest was something uniquely wonderful.

"I was 55 when I did my first trek into Everest Base Camp and that's what it was for me, a life-changing experience," he said.

But it has been a life-ending experience for 11 people so far during this year's climbing season, including two Americans.

The most recent was 62-year-old Chris Kulish.

He was an attorney from Colorado who suddenly died just a few days ago during his descent.

Berger says overcrowding often results in climbers, many of whom are under-experienced, spending too much time at dangerously high altitudes.

"There has to be regulation of how many climbers can actually leave 'high camp' on any one day so that you don't end up with those bottlenecks," he says.

With that said, a record number of climbers have reached the top of Mt. Everest this year, with officials from Nepal handing out 367 permits to foreigners at $11,000 apiece.

But Berger says even if officials there enacted stronger safety regulations, enforcing those rules would be extremely difficult.

"(That is) because you cannot have a government official at 26,000 feet waiting to make sure that everything works," he said.

Still, it remains unclear if Kulish's death can be directly linked to overcrowding on the mountain.