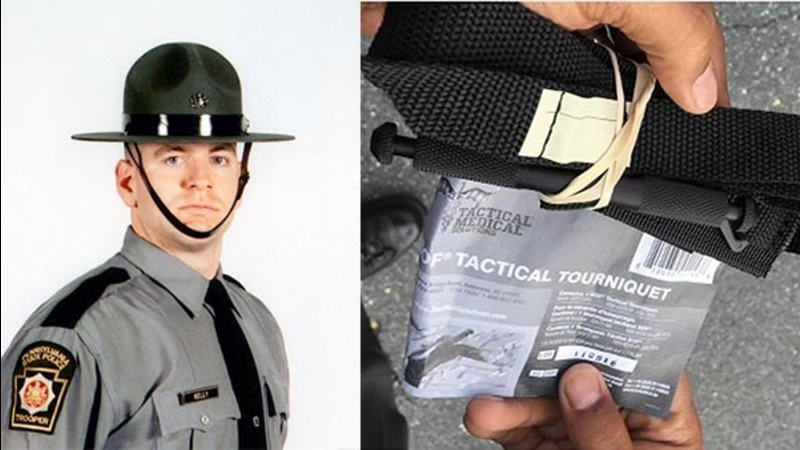 PLAINFIELD TWP, Pa. -- A Pennsylvania State Police trooper who was shot several times during a traffic stop likely saved his own life by applying a tourniquet to his leg before help arrived, authorities said Wednesday as they released more details of the violent confrontation along a busy highway.

Cpl. Seth Kelly, 39, remained hospitalized in critical condition after suffering gunshot wounds to his neck and shoulder area and to his leg in the close-quarters gunfight. Police say the 13-year veteran had a successful second surgery on Thursday.

Watch video of the Pa. State Police update on the shooting of a state trooper in Plainfield Twp., Pa.

"He's battling. He's certainly not out of the woods by any means, but ... he is a very strong individual, and he displayed a will yesterday that he wanted to live and get through this," state police Capt. Richard D'Ambrosio said at a press conference.

The suspect, 22-year-old Daniel Khalil Clary, of Effort, faces charges that include attempted murder of a law enforcement officer and aggravated assault. Clary, who was shot and remains hospitalized, has given a statement to police.

Kelly was helping another trooper arrest Clary, whom they suspected of driving under the influence of marijuana, when Clary began fighting with the troopers, police said. The struggle lasted nearly two minutes, and at one point all three men were "wrestling and rolling around" the right lane of busy Route 33, in Plainfield Township, north of Philadelphia, as cars and trucks whizzed by them on the left, D'Ambrosio said.

Despite being hit with a stun gun, Clary managed to break free, retrieved a semi-automatic pistol from his car and opened fire on Kelly and Trooper Ryan Seiple, authorities said. Both troopers returned fire, hitting Clary several times. Clary then fled, driving himself to a hospital where he was taken into custody.

Shot and gravely wounded, Kelly had the presence of mind to grab the tourniquet he wore on his service belt and apply it to his bleeding leg, D'Ambrosio said, "more than likely saving his own life."

Seiple, 31, received a minor injury during the scuffle but was not shot.

Officials thanked emergency medical workers at the scene and staff at St. Luke's Hospital in Fountain Hill, where Kelly was flown, for saving his life.

Officials, meanwhile, are awaiting the results of a blood test to see what Clary had in his system.

Morganelli said he will seek a "very, very, very long jail sentence" for Clary, who was not licensed to carry the gun, according to the prosecutor.