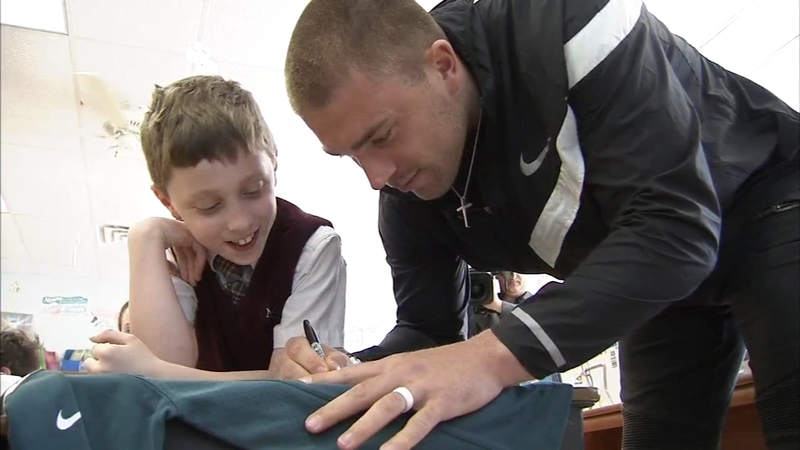 PAOLI, Pa. (WPVI) -- When Zach Ertz walked into a class at St. Norbert's in Paoli Thursday the students couldn't believe it.

In fact, one young lady had to ask, "Is this real?"

Ertz laughed and said of course, "It is real."

But this wasn't just a random classroom visit for the Pro Bowl tight end to just sign autographs and make a lot of kids happy.

Sobota has a rare condition that causes blood vessels in his brain to tangle.

While having treatment in California at Stanford University, which is Ertz's alma mater, Sobota's nurses reached out to his favorite NFL player through Twitter and the Eagles star obliged.

During the visit, Ertz delivered Sobota with an autographed game jersey. He even talked about some of his most intimate secrets.

Sobota asked Ertz, "Did you feel like your head would explode when you won the winning touchdown of the Super Bowl?"

Ertz laughed and said, "It was close. It almost exploded, for sure."

Then the whole school formed a tunnel for Sobota to run through with Ertz right behind him.

Ertz said checking in on one of his biggest fans was the least he could do.

"We're just trying to give him some hope and love. Obviously he's going through a lot. But he's got that positive outlook and his family is amazing people," said Ertz.

They've given so much support, and even recently raised $7,600 for his treatment during their Catholic Schools Week.