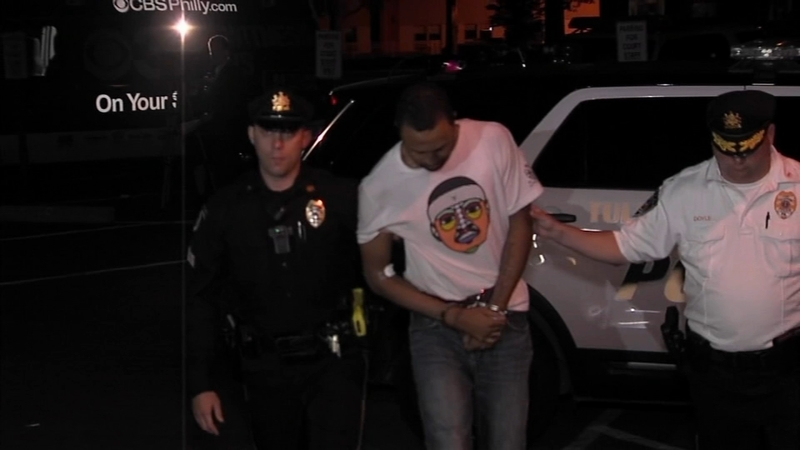 Father sentenced after killing toddler in crash during robbery getaway

BUCKS COUNTY, Pa. (WPVI) -- A New Jersey man was sentenced Monday to serve 8.5 to 30 years in state prison for murdering his 2-year-old son by crashing his car while fleeing a Tullytown crime scene.

"It was not an accident," Bucks County Common Pleas Court Judge Robert O. Baldi told Christopher D. Kuhn, whose son, Qadan Trievel, was thrown from Kuhn's SUV and killed. He told Kuhn he had been "willing to risk everyone else for the sake of you."

Baldi convicted Kuhn, 28, of Hamilton, N.J. of third-degree murder and other charges on March 28 after a three-day, non-jury trial.

The child was killed in October 2017, when Kuhn's Jeep SUV blew through a red light, struck another vehicle on Route 13 and rolled over. The unbelted toddler was ejected onto the roadway, fatally fracturing his skull.

The crash happened moments after Kuhn, his son in tow, stole $228 worth of sound equipment from a Tullytown Walmart. Police said he fled, tires squealing, from the parking lot just as police were arriving.

After the collision, Kuhn paced briefly near his son's motionless body, then took off running as police approached. He was captured in a nearby wooded area.

"I don't know what to say, because nothing's going to bring him back. I'm just truly sorry," said Kuhn, standing before Baldi in handcuffs. "I loved my son. I don't want anybody to think that I didn't."

Kuhn blamed his actions - and his decision to shoplift that day - on a drug addiction. "The addiction I was suffering took control of me. On a day-to-day basis, it was just consuming me, all day, all the time. I couldn't beat it."

James argued for a lengthier sentence, saying Kuhn had a criminal history including theft, fraud, terroristic threats against Qadan's mother, endangering the welfare of a child, resisting arrest and violating a domestic violence restraining order filed against him.

James said Kuhn had threatened to beat and kill Qadan's mother, Mackenzy Trievel, once by choking her and putting a screwdriver to her neck while she held their two-week-old son, another time by threatening to chop off her head.

James said two years ago Kuhn filed an assault complaint against Trievel, resulting in criminal charges and a temporary restraining order against her. Video evidence later showed Kuhn's report to be false, James said, and the charges were dropped.

James said that Kuhn repeatedly had flouted the court system by failing to follow through with court-ordered drug treatment and counseling.

"This is a man who does what he wants when he wants," James told Baldi. "Instead of taking his sobriety seriously, he thumbs his nose at the court system."

James also recited a decade-long history of unsafe driving that resulted in Kuhn having a suspended license at the time he killed his son.

Even after the collision, James argued, Kuhn made no effort to aid or comfort his dying son. Instead, he said, Kuhn stepped over the boy's body and fled when he heard police sirens approaching.

"It's only after he's taken into custody that we see the tears," James said.

"Qadan was my world and there are no words to convey the amount of love I have for my son or the amount of suffering I am experiencing as a result of him being killed, literally ripped away from me in an instant at the hands of a careless person," she wrote in a statement read in court.

Kuhn, she wrote, deserves a maximum prison sentence "because I believe he is likely to re-offend. He needs to be held accountable for his blatant disregard for others and stopped from hurting anyone else the way he has crushed me."

Bastedo submitted 17 character reference letters to Baldi, as well as calling six friends and family members as witnesses. They described Kuhn as a generous, good-hearted person who doted on his son and, bedeviled by drug addiction, made a horrific mistake.

"The opioid crisis is like nothing we've ever seen," Bastedo argued. "His opioid addiction led to his actions. Opioid abuse takes a lot of innocent people with it."

Baldi said he accepted "as a fact" that Kuhn loved his son, but rejected the description of his crimes as merely an accident or a mistake.

"Your choice was to go and commit a retail theft and take your child with you," Baldi told Kuhn, calling his acts "selfish and self-absorbed."

"All of this happened because you did it," the judge said. "You caused it."

Baldi said the length of the sentence "means for the rest of your life, someone is going to be watching over you," and that Kuhn can be re-sentenced if he offends again after being paroled.