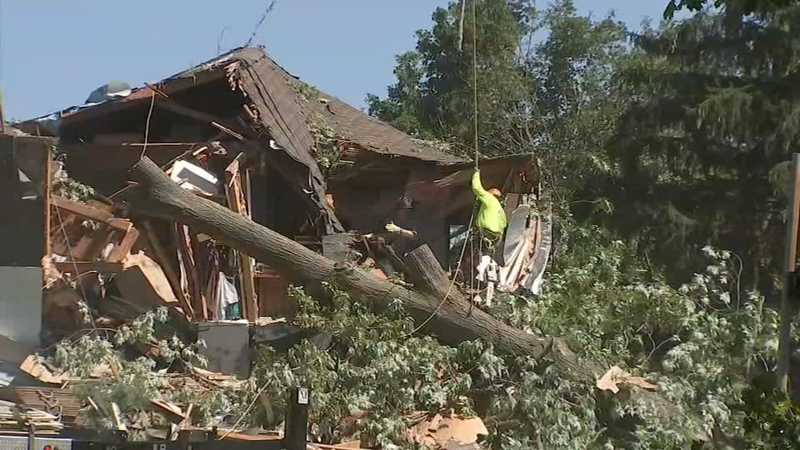 Investigators from the National Weather Service confirmed an EF-2 tornado from the Fort Washington area of Upper Dublin Township to Horsham, Pa.

The estimated peak winds were 130 mph.

A look at the damage along Highland Ave. in Fort Washington. Power lines down across 309. @6abc #TropicalStormIda #StormDamage #Weather #Pennsylvania pic.twitter.com/W1bH6yK2MI

The roof was torn off the Upper Dublin Police Department building. Officers asked anyone who did not need to travel to please stay at home.

Roof torn off of the Upper Dublin Police Dept. Officers are handling that and responding to damage across the area. They ask that anyone who doesn’t have to travel please stay at home. @6abc @UpperDublinPD #TropicalStormIda #Weather pic.twitter.com/14hXk3bcRO

"We came to the police station and the roof was off water was pouring into the ceiling and they evacuated us out of the building," said Ben, who lives nearby.

The field behind Upper Dublin High School was filled with toppled trees, even falling around the stadium and bleachers.

"It's pretty messed up with yesterday being the first day of school and now we don't know when we're going to return to school," said Patrick Richichi.

Downed power lines and large trees also made up most of the treacherous trek into Horsham as the remnants of Hurricane Ida moved through.

Herbert said she just made it home as the severe weather moved in.

"We've never seen anything like this here," she said.

A trail of destruction welcomed many drivers along Welsh Road and Limekiln Pike. With a steady flow of rain, the roads looked more like rapids as flooding remained consistent.

More destruction was apparent in nearby Maple Glen.

"I felt the house starting to shake. The rain that had been kind of steadily falling started to really increase in intensity to the point that I couldn't even hear myself think," said Mike Zajac.

Large trees and power lines were also taken down by the severe weather.

The early hum of generators could also be heard from those who lost power.

Just as the rain began so did the threat of flooding.

In Pottstown, West High Street - which is prone to flooding - proved too much for some drivers who ended up abandoning their cars

Rescuers prepared for a long night ahead

"You got to use common sense; don't jeopardize your life for your vehicle," said Joshua Groff.