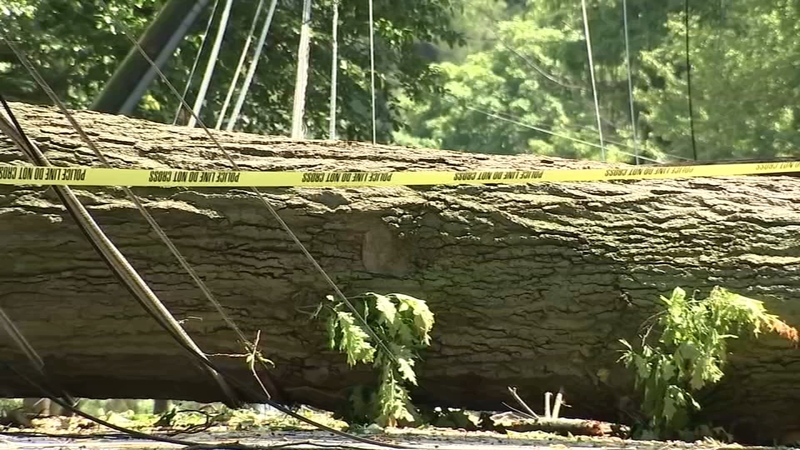 PENN VALLEY, Pennsylvania (WPVI) -- The day after a storm barreled through the Philadelphia region, thousands of Pennsylvanians are without power.

"This morning is really what's crazy, as far as what I'm seeing with trees down, live wires," said Penn Valley resident Wendy Garber.

Wynnewood resident Hanna Reuveni said she was driving down Remington Road Wednesday afternoon when lightning struck a tree, causing it to fall on the car behind her.

Then lightning struck again, causing the car in front of her to hit a utility pole, and a second large tree to fall and block their path.

"We couldn't find a way out because we couldn't see anything," said Reuveni. "It was just water and rain and debris and eventually there's a little turn, we took that turn and it was chaos. It wasn't pleasant at all."

Tens of thousands of people were still without power on Thursday afternoon. PECO spokesperson Greg Smore said all crews are working, with 2,200 additional employees and contractors from out of state to support restoration.

"They might be replacing entire poles or multiple poles to restore service," said Smore. "We've seen some of those large trees that come down that can really knock out three or four poles at a time, and it takes several hours and the work of multiple people to be able to replace just one pole."

Some PECO residents won't have power restored until Sunday.

"This morning I definitely had a breakdown," said Kristen Henry. "We also additionally had some power surges that took out our furnace, our AC, a whole bunch of our inside appliances: stove, washer machine that we've been dealing with for the past six weeks, so all of that on top of everything... it's hard."