WPVI
LOS GATOS, Calif. -- A homeowner captured some remarkable video of a standoff between a mountain lion and two coyotes in Los Gatos.

It all took place in Monica Hylbert's backyard on Friday morning. She heard strange sounds coming from the foothills of her neighborhood.

"Just after 7 a.m. I heard growling and the yipping of coyotes," said Hylbert.

In the video, the coyotes appear to work together to corral the big cat and stop it from moving forward.

"I was pretty calm about it, I didn't feel threatened. I was just intrigued by what was happening. It's obvious the coyotes were trying to protect something," Hylbert said.

The dramatic scene lasted about a minute. Hylbert stopped recording just as the big cat was about to pounce.

"As soon as it started to pounce, that's when I panicked and shut the door. Ended up shaking for about 5 to 10 minutes," she said.

The mountain lion and coyotes retreated into open space.

The next morning, the Hylbert's security camera captured an image of possibly the same mountain lion returning.

Mountain lion sightings are rare, but not unusual in the area's foothills. Earlier this month, there was a sighting of a big cat in Hylbert's neighborhood. 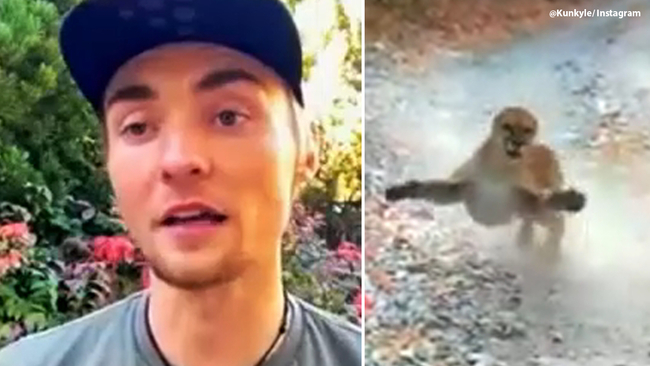