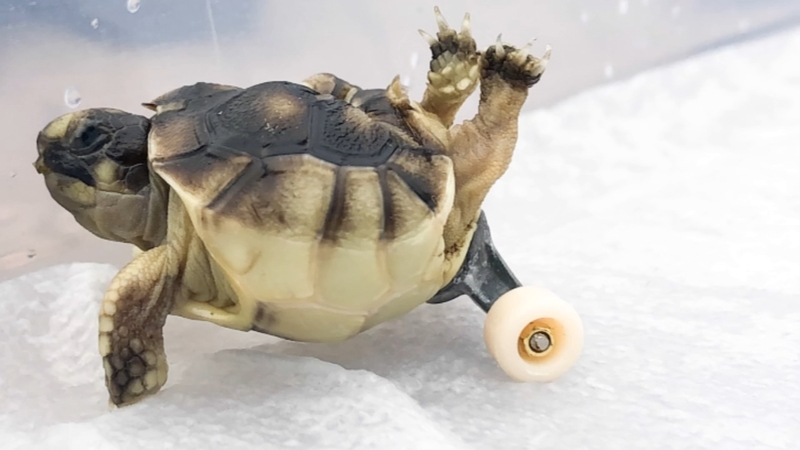 WILMINGTON, Delaware (WPVI) -- The Betz home was already pretty full with four kids and a few pets. Then, they decided to add about three dozen reptiles to the mix.

It's Randy Betz's side hustle. He helps people hatch their own tortoise eggs, which is a bit of a different world from his day job as a medical sales consultant.

That is, he says, until his two worlds began to collide.

"I'm around spine deformity all the time, and this little guy has some sort of turtle-related spina bifida," said Betz.

The little guy is named Helix. He couldn't walk and was at risk of being euthanized, that is until Randy had the idea to take the wheels off a mini skateboard.

"I took some glue, some superglue, and I glued it right on the back end of it," he said.

Slow and steady, as any tortoise would, Helix learned to walk.

"Very heartwarming to see him as happy as he was able to move around," said Betz.

Betz said one of the most important parts in all of this to him is helping other tortoises like Helix. So he made a t-shirt, and for every one sold, a portion is being donated to a tortoise conservation.

He hopes it's a lesson and giving back and helping others that he and his wife would like their kids to pick up on, too.

"From the outside, he might look different. The same thing goes if they see a child in a wheelchair or they see someone different. They're really not different," said Meghann, Betz's wife.
Report a correction or typo
Related topics:
pets & animalswilmingtonnew castle countydelawareturtlesdisabilitypetsdelaware newsanimals
Copyright © 2021 WPVI-TV. All Rights Reserved.
More Videos
From CNN Newsource affiliates
TOP STORIES