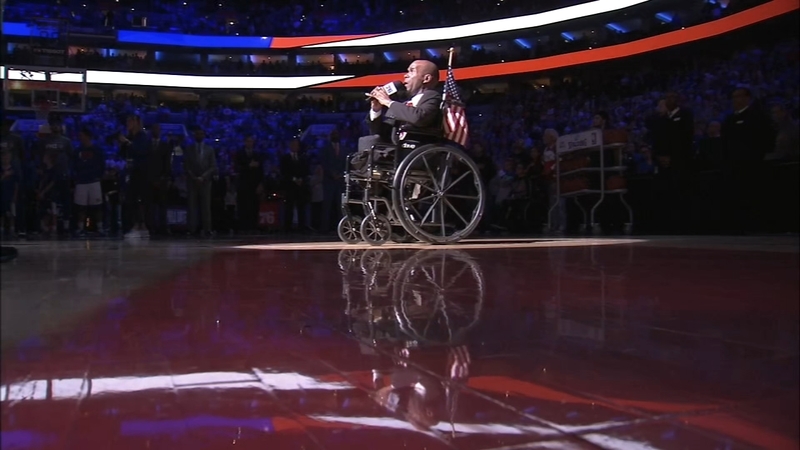 PHILADELPHIA (WPVI) -- On Sunday evening, the men and women of our armed forces received some much-deserved recognition during Military Appreciation Night at the Wells Fargo Center.

The annual event is hosted by the Philadelphia 76ers and this year was presented by Toyota.

"I'm grateful that Philadelphia, the 76ers are having an event like this, I'm grateful," said U.S. Air Force SSGT. Gerard Harville.

Harville, who is stationed out of Joint Base McGuire-Dix-Lakehurst in Burlington County, New Jersey attended the event with his father.

"Every day should be military day because every day we have the freedom, the right, the opportunity to live in a country that gives us events like this," said Herrod Harville.

Harville also took part in one of the evening's most inspiring moments.

Members of the base unveiled a 1,700 square-foot flag during the national anthem.

Those coming to the game were also given the opportunity to show their appreciation. Many with stories to tell of their friends and loved ones at the "Thank you for your service banner."

"I have an uncle that served in Iraq," said one passerby.

"My dad was in the Vietnam War," said another.

During the game itself, there were presentations honoring all members of the military.

During halftime, there was a presentation of special jerseys for veterans from each of the last six major U.S. conflicts.

The event held a lot of meaning to many in uniform.

And as is the case with most heroes, typically shy away from the spotlight.

"What it means to serve is just it's not about yourself, it's about everybody else, it's about this country and what we fight for," said US Marine Corps SSGT. Stephen Winther.