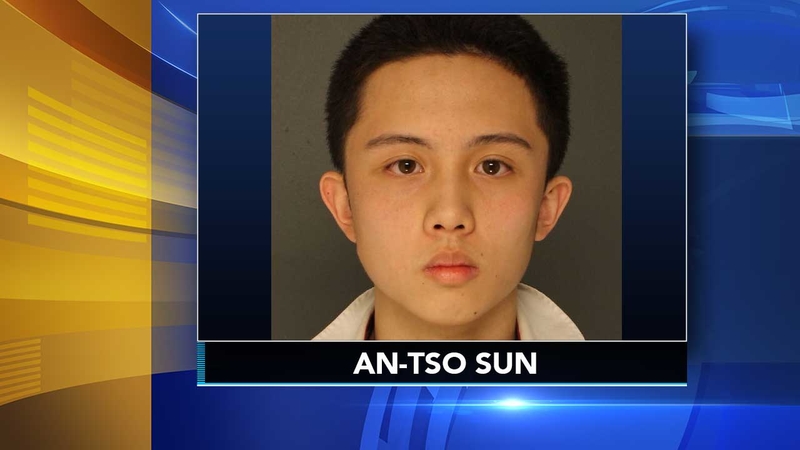 PHILADELPHIA (WPVI) -- A Taiwanese teenager accused of threatening an attack on a high school in Upper Darby has been charged federally.

An-Tso Sun, 18, was charged Tuesday by federal complaint with possessing ammunition while being in the United States on a nonimmigrant visa, a felony under federal law.

Sun entered a guilty plea on Monday in Delaware County district court to charges of terroristic threats. He was given a sentence of four to 23 months in jail, but the judge ordered immediate parole to federal authorities for deportation.

Sun is a Taiwanese national who came to the United States to live with an American host family and study at Bonner-Prendergast High School.

According to the complaint, Sun told another student: "Hey, don't come to school on May 1... I'm going to come here armed and shoot up the school."

The student reported the incident to school officials, who then alerted law enforcement.

"When someone makes an alleged threat of this kind, law enforcement must take it seriously and investigate all leads," U.S. Attorney William McSwain said. "Law enforcement is committed to doing everything in our power to stop an attack before it happens. We must keep our children and our community safe from harm."

According to the complaint, after the report of the threat, school officials and the Upper Darby Police called Sun's host family to inform them of the alleged threat.

Thereafter, Sun's host-mother told police that she hired an attorney for Sun, returned home from work, and removed numerous items from Sun's bedroom, placing them into a black duffel bag. She then allegedly brought this duffel bag to the attorney she had spoken with earlier in the day.

According to the complaint, the duffel bag was later given to law enforcement and was found to contain multiple guns and several types of ammunition.

Sun has been in custody in Delaware County since his arrest by Upper Darby police in March.

"Thanks to the tremendous work of our local, state, and federal partners, a potential school tragedy was prevented," said Special Agent in Charge Marlon V. Miller, Homeland Security Investigations Philadelphia Field Office. "Homeland Security Investigations will continue to support all of our law enforcement partners to ensure the safety and security of our communities."

The case was investigated by Homeland Security Investigations, the Upper Darby Police Department and the Delaware County District Attorney's Office, and is being prosecuted by Assistant United States Attorney Sarah M. Wolfe.