"They're called dirt bikes for a reason. You ride them in the dirt," said Amen Brown, who represents the 190th District.
WPVI
By Bob Brooks 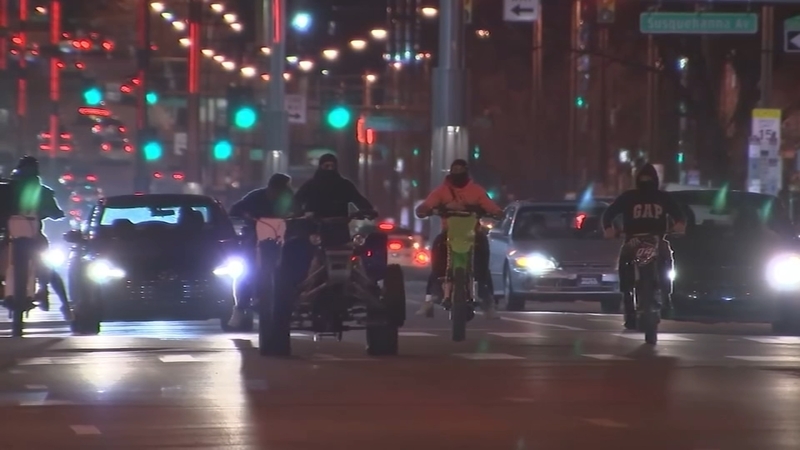 "They're called dirt bikes for a reason. You ride them in the dirt," said Brown, who represents the 190th District.

A sea of ATVs and dirt bikes swarmed Philadelphia streets Friday night. Chopper 6 was overhead as they weaved in and out of traffic. Some got close to drivers, bringing cars to a standstill as they let the crowd of riders drive by recklessly.

Brown says he worries these incidents will become more violent -- like last summer when a rider terrorized a driver on Broad Street.

"We need to put laws in place that's going to bring some next day change," said Brown.

The representative wants to do a few things: sit down and talk to the riders, pass legislation to deter riding and the ability to destroy the vehicles when caught.

According to Philadelphia police, if they can confiscate these vehicles safely, they will. Hundreds of these confiscated vehicles are reportedly destroyed yearly.

On Tuesday night, ATV and dirt bike riders gave Philadelphia police more trouble as they surrounded the officers at the intersection of Kensington and Hunting Park avenues.

Police said they were transporting a prisoner at the time.

"We got a prisoner in the back... We're trying to keep rolling," officers were heard saying on police radio.

The riders left moments later and went the wrong way down a street.

"I get it, it looks fun but ATVs are for off-road," said Anthony Carter of Logan.

"One almost ran me over the other day on the sidewalk," said Charlotte Tammer-Morash of Center City.

Justin Rosenberg, the CEO of Honeygrow restaurants, says it's bad for business at every level.

"I think more residents are going to be upset, people will move out. People visiting are not going to want to come back," said Rosenberg.

Philadelphia police say public safety is their number one priority, which is why they can't chase these riders through the city.

Brown believes that the Pennsylvania State Police could assist Philadelphia police in tackling the issue.