Washington released a statement, stating, "To our knowledge, everyone involved was offered onsite medical evaluation."
ESPN
By Tim McManus 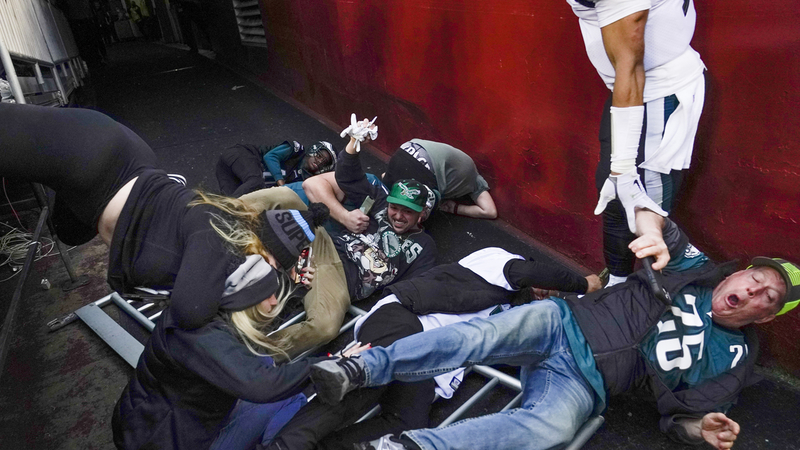 PHILADELPHIA -- Four of the individuals who fell as a result of a railing collapse at FedEx Field on Sunday -- all of whom say they suffered injuries from the incident, most of them minor -- refuted a statement by the Washington Football Team suggesting they were offered on-site medical evaluation.

"They didn't ask if anyone was hurt, and they sure as hell didn't ask if anybody needed medical attention," said Andrew Collins, 26, of Brooklawn, New Jersey. "The only thing the staff said to us was to get the F off the field."

A railing on the side of the tunnel leading to the visiting locker room at FedEx Field collapsed just as Eagles quarterback Jalen Hurts was exiting following Philadelphia's 20-16 win. Multiple videos show a group of about eight fans falling approximately six feet to the ground.

Hurts sidestepped the falling fans and wasn't hit. He helped one individual up and asked several of them if they were OK while posing for pictures. 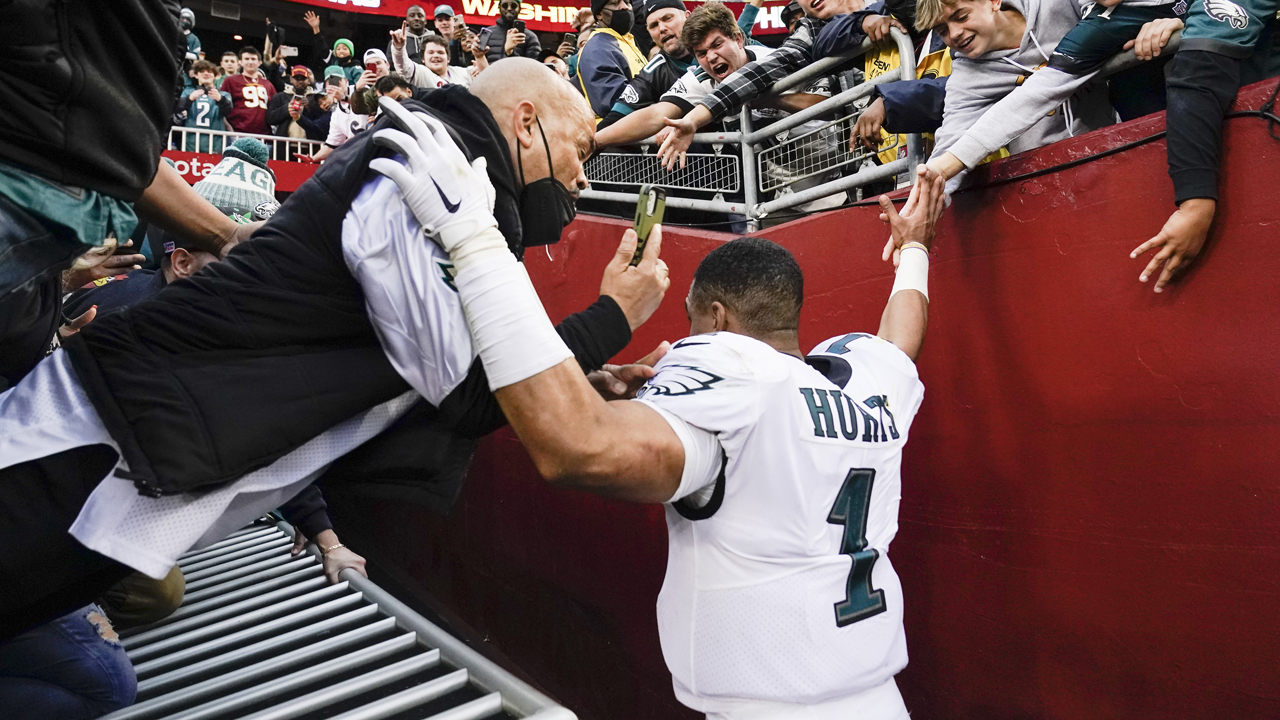 A railing surrounding fans collapses causing them to fall towards Philadelphia Eagles quarterback Jalen Hurts (1) at the end of an NFL football game, Sunday, Jan. 2, 2022.

Washington released a statement Sunday evening, stating, "To our knowledge, everyone involved was offered onsite medical evaluation and left the stadium of their own accord. We're very glad no one appears to have been seriously injured. The safety of our fans and guests is of the utmost importance and we are looking into what occurred."

Mike Naimoli, a 26-year-old from Sicklerville, New Jersey, called that statement "completely incorrect," saying that there was no medical assistance offered. Instead, he said they were told, "'Everybody get the F off the field,' and [they] quickly grabbed us away from Jalen and shooed us up into the stands."

According to a source with knowledge of the situation, Prince George's County EMS personnel were on the scene within five minutes and began treating those who needed medical attention, including one media member who had been carted off and another fan. The source said they weren't aware of anyone else needing medical attention at that time.

The team is continuing to investigate the situation.

NFL spokesperson Brian McCarthy, in an email, said: "We are reviewing the matter with the club to understand what happened and to ensure it does not happen again."

Naimoli and his fiancée, 24-year-old Morgan French, also of Sicklerville, drove to the game with Collins and his girlfriend, 22-year-old Marissa Santarlasci.

Naimoli, who is seen on the video in the green Hurts jersey, said he began experiencing neck and arm pain, as well as a tingling sensation in the hand that he said got trapped underneath the barricade, shortly after the incident. He went to the Inspira Medical Center in Mullica Hill, New Jersey, Sunday evening to get checked out, and was fitted with a neck brace as he waited in the emergency room, he said. When he was discharged after 5:30 a.m. Monday, he was diagnosed with a cervical strain and a head injury along with elbow and knee contusions, documents show.

Collins said he was experiencing lower back pain and a pulled groin Monday, while Santarlasci and French said they suffered substantial leg bruising.

"I was the last person to fall," said French, who has a bruise that runs from the top of one hip bone down to her knee, to go with bruises on both shins. "I was on top of everyone so I quickly jumped up, and the security guard literally pulled me up by my two arms and got me off the field. I didn't have time to process. I was more so in shock."

One Washington team official said the area where the fans congregated was for disabled people and designed for wheelchair access, and that the railing is not load-bearing and is therefore not designed to withstand hundreds of pounds leaning into it. The group contends, however, that they were granted access to the area by a member of stadium security, and that there was no signage indicating it was a restricted area.

"The security guard at the bottom, we [asked] him, 'Can we go over there?' And he was like, 'Yeah,'" Naimoli said. "If Washington Football Team wants to come out and say that the area is restricted, there was no documentation of that at all. The one security guard that was right in front of that area swept us in there and was like, 'OK, go ahead over to the tunnel.'" 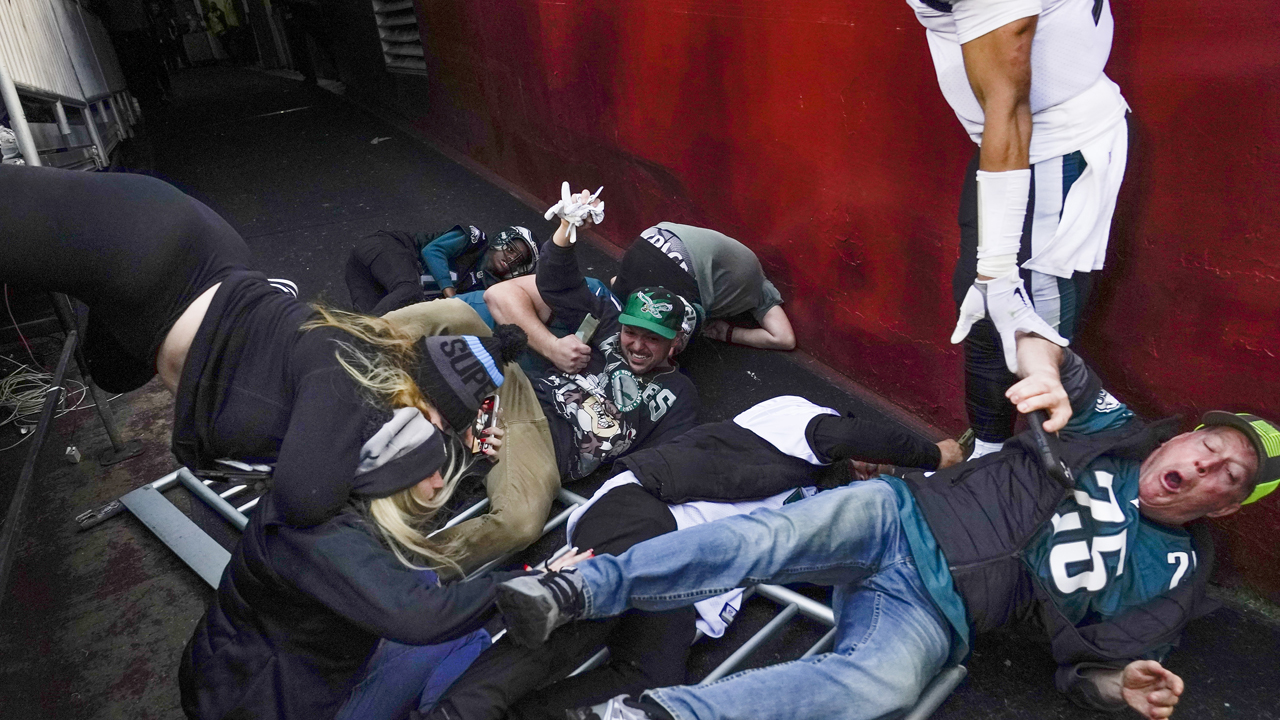 Fans lay on the ground after a railing collapsed causing them to fall towards Philadelphia Eagles quarterback Jalen Hurts (1) at the end of an NFL football game.

This wasn't the only incident at FedEx Field this season. In Washington's season-opening loss to the Los Angeles Chargers, a pipe connected to rainwater storage broke and drenched a small section of fans.

"I was at the front of the railing and I felt pressure as soon as we went down there. Me and Andrew were like, 'This thing is going to collapse,'" said Santarlasci. "More and more people kept piling in ... and as soon as Hurts came by, obviously it collapsed. I fell down. And as I was getting up, I was trying to get my foot out of the railing because it was still caught, and the people at FedEx, they were just ripping the railing as my foot was still caught in it.

"They didn't even ask, 'Are you OK? Do you need help?' Nothing. They just went about their day. Hurts was actually the one asking, 'Are you guys OK?' It was crazy."