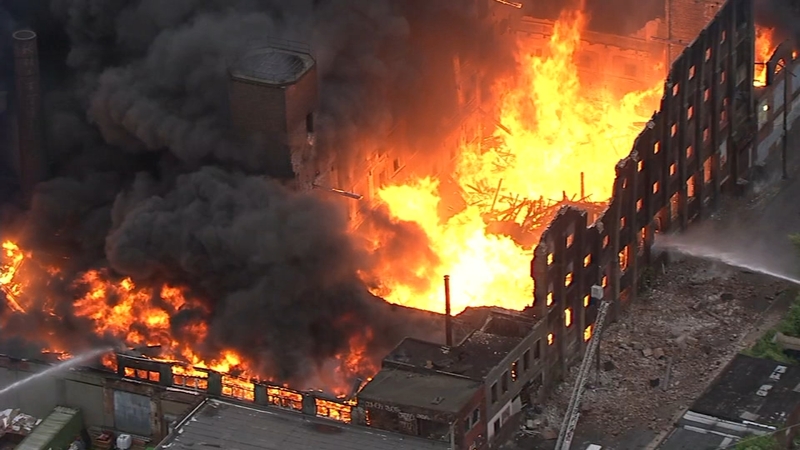 NORTH PHILADELPHIA (WPVI) -- There are no injuries reported, and no homes evacuated. But it was a scary Friday night for folks in one North Philadelphia neighborhood as firefighters tried to get a 5-alarm blaze under control.

Philadelphia Fire Commissioner Adam Thiel said the fire was placed under control but firefighters continued working throughout the night.

Flames and thick black smoke poured from the four-story warehouse at 21st and Lippincott. Chopper 6 captured video from above the inferno in North Philadelphia as walls collapsed and transformers popped and exploded.

Delilah Newton of North Philadelphia said, "Next thing I knew I just saw a whole big boom. And it was coming towards us this way. They were dragging me down the street. You could just feel the heat all over you."

Chopper 6 was live over a raging factory fire in North Philadelphia on May 19, 2018.

"It looked like a big blaze came up and everything blew out, transformers and everything," added Anthony Banks of North Philadelphia.

This was a five-alarm fire and officials say 65 fire apparatus and more than 200 firefighters were brought in to battle it.

Multiple streets were closed while they worked. Officials say there are other buildings in that complex, and the fire started to spread.

Philadelphia Fire Captain Clifford Gilliam said, "We did have what we call a fire extension over to another building that other companies did come and extinguish that fire."

Officials say the fire started around 6:30 p.m. and neighbors were quickly drawn to the scene.

Christopher Withers of Hill Creek said, "I was up the street taking pictures for my cousin's prom. One of the children was like - 'look! The sky is turning black.' We immediately knew it was a fire."

Delilah added, "I'm not leaving until all of this is clear. I just want everybody to be okay."

Officials are still investigating the occupancy and use of the building. There is no word on what started this massive fire.

Fire officials say the blaze is under control in North Phila, but firefighters will be here all night working. No injuries reported. I’ll have a live update from the scene at 11 on @6abc. pic.twitter.com/YOXsR3vkpA