The call came in just before 10 p.m. for a massive fire showing from a vacant warehouse near Melvale and Tioga streets.
WPVI
By 6abc Digital Staff and Corey Davis 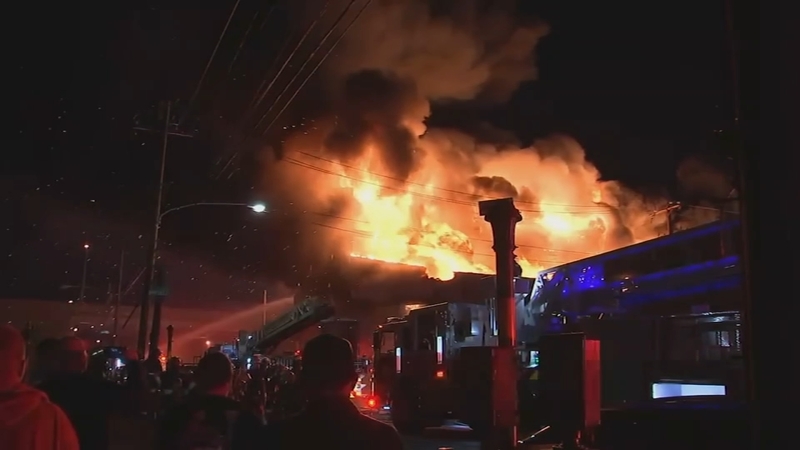 The call came in just before 10 p.m. for a massive fire showing from a vacant three-story warehouse located near the intersection of Melvale and Tioga streets.

The Action Cam was there as the raging flames sent smoke billowing into the sky.

Officials say a tire manufacturing company once operated out of the warehouse. It was no longer in use, but whatever was left inside was fueling the fire.

Firefighters initially tried to get inside the building, but backed away when the flames started to intensify and shot through the roof.

The blaze reached four alarms before it was brought under control around midnight Monday. Firefighters remained on the scene early Monday morning putting out hot spots.

A portion of I-95 near the fire scene was closed in both directions for a period of time due to smoke blowing across the roadway.

Tim McGinley, one of the owners of Bonk's Bar located next to the warehouse, says a bartender called and woke him up to tell him about the fire. He told Action News the firefighters are the reason his bar is still standing.

"They're actually on our garage roof fighting the fire. Winds change, if anything would've changed, our bar would've went down. They really saved the day," McGinley said.

McGinley has been feeding firefighters cheesesteak eggrolls to show his appreciation for saving the bar, which has been around since the 1950s.

There was no immediate word on what sparked the blaze.