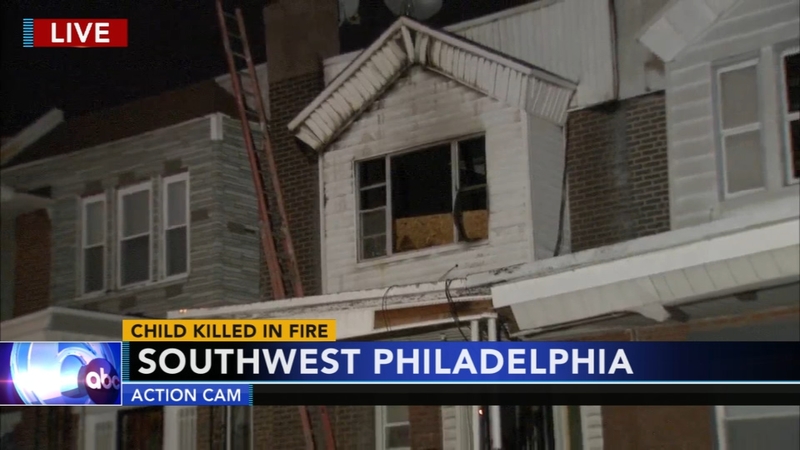 SOUTHWEST PHILADELPHIA (WPVI) -- An 8-year-old boy has died following a fire in Southwest Philadelphia, that left four others injured.

"They tried to wake him up and get him out but the smoke was just too much - too much," said Karen Pankey.

Pankey is a relative of the victim. She says the home belongs to the boy's grandfather.

Fire crews arrived on the scene to find heavy smoke on the second floor of the two-story row house.

According to the next door neighbor, Harold Tucker, the grandfather crawled out onto the roof of the porch before trying to go back in to rescue his grandson.

"I looked out on the roof and I seen the flames out there," said Tucker. "He was panicking. He was scared to death. He has a bad hip and everything and he was on the roof."

Firefighters soon rescued the elderly man from the porch roof and the boy from inside the building.

"When crews entered they could see fire going up the stairwell," said Asst. Chief Tony Sneidar.

The child was rushed to Children's Hospital of Philadelphia with smoke inhalation, where he later died.

The boy's name has not yet been released.

While the investigation continues, Pankey wants to thank the neighbors for trying to save the boy.

"He loved to go to school," Pankey said. "He loved his mom and his dad, loved his pop pop, my dad. It's sad he's gone. I don't know what else to say."

Determining a cause will likely take a few days.

As for the boy's grandfather and other three that made it out, they were all rushed to local hospitals, but are expected to recover.