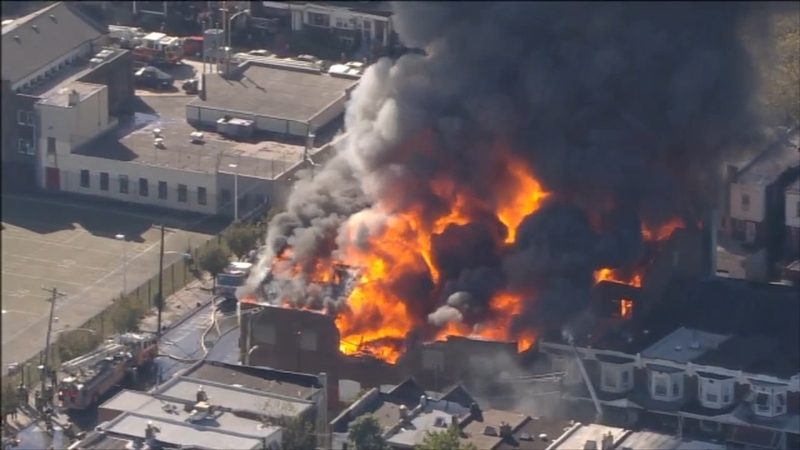 PHILADELPHIA (WPVI) -- Firefighters continue to pour water off and on to keep hot spots from flaring up at the site of a massive 3-alarm blaze that ravaged an auto garage in the Cobbs Creek section of Philadelphia.

The fire erupted around 10 a.m. Monday at Al's Auto Service & ABM Automotive on the 200 block of South 59th Street.

The view from Chopper 6 showed a building consumed by flames with a large plume of black smoke billowing over the city.

This was the view from Chopper 6 as it approached this morning's 3-alarm fire in Cobbs Creek.


Just a short time after the fire began, several of the building's walls collapsed.

Firefighters could be seen on top of adjacent rowhomes.

"The fire was over the top of the houses and I heard like seven booms, like something was blowing up, and smoke was everywhere, it was choking," said Carolyn Scott.

Contractor Charles Allen had arrived at the building to begin thousands of dollars in renovations by the 76-year-old owner, Al Christian.

"And I saw the fire, knocked on the door and I just started crying. I didn't know if he was alright or not, and when I found out he was ok, I was ok," said Allen.

RAW VIDEO: The Action Cam was on the scene of a large fire in the Cobbs Creek section of Philadelphia on October 21, 2019.

There was no immediate word on any injuries associated with this blaze, nor on the cause of this fire.

Philadelphia Fire Commissioner Adam Thiel said rescuers do not believe there is anyone inside the burned-out building.

The fire department said the blaze was under control around 1 p.m., but Thiel said there was still a lot of work to do.

He described the building as a "big garage with a lot of cars inside."

"They put themselves really in harm's way to protect those exposures to these adjacent residences," said Thiel.

Chopper 6 over the scene of a large fire in a Cobbs Creek auto body shop, October 21, 2019

Allen says the owner stored about 30 classic and vintage automobiles for people in the 100 by 200 foot building.

He says Christian is the husband of Eileen Christian, who is the pastor of Unity Baptist Church in South Philadelphia.

Firefighters are expected to remain on the scene overnight. They expect to bring in heavy equipment Tuesday to tear down brick walls that are in danger of collapsing.

A family nearby has been displaced because a wall from the burning building collapsed onto their home.