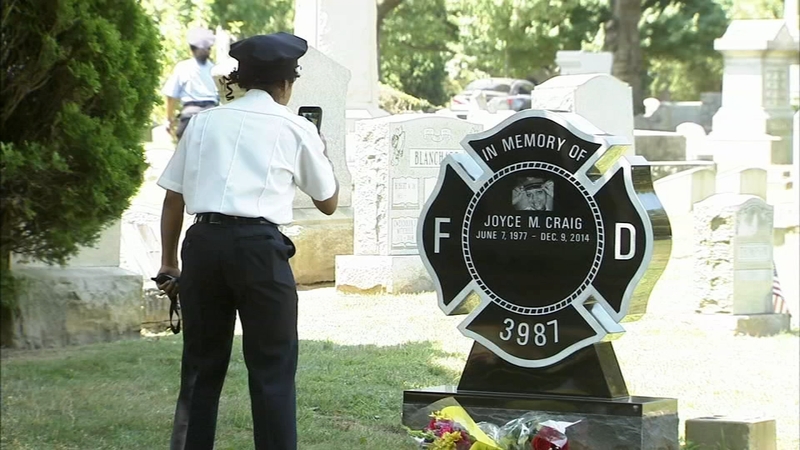 PHILADELPHIA (WPVI) -- A new headstone now marks the final resting place of a local firefighter killed in the line of duty.

It was a little more than 3 and half years ago now the highly respected Philadelphia fire Lieutenant died while battling a fire in West Oak Lane.

Today a monumental step was taken to honor her memory and sacrifice.

Lt. Craig's family were the first ones get an up close look at the headstone.

Her brother Mike says his sister would have liked this.

"it's what she earned my sister was a hard worker and she was committed to the department so I think if nothing else she'd respect that commitment she had during her service is being returned," he said.

The man who designed it is Jim Lee.

He went to high school with Craig.

He says he worked closely with her son on the layout.

"He said my mother really loved her badge, and I said let's go off of that," said Lee.

And adds his old classmate was on his mind during the entire process.

"She gave her life for the city, she was a Dobbins alumni, a beautiful person inside and out," said Lee.

Also on hand for the unveiling were plenty of Craig's colleagues.

Many here worked with the Lieutenant personally.

"We came in together. We were the class 178," said Captain Forrest.

She's says they've been working hard over the last 3 years raising donations for a headstone like this.

"I'm proud and I'm sure Joyce would be proud. Joyce is deserving of it and more she gave her life for the citizens of Philadelphia." said Captain Forrest.

17:11 "alright now the community is encouraged to come out here and take a look at the head stone.