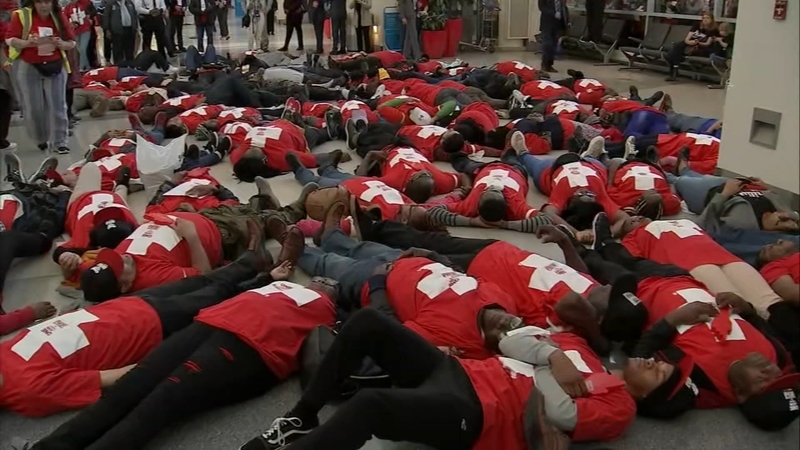 PHILADELPHIA (WPVI) -- Airline catering workers are speaking out against the industry, saying they are facing a healthcare crisis.

On Thursday, hundreds of unionized workers from UNITE HERE gathered outside Terminal B at Philadelphia International Airport to protest.

They came from near and far. Many in matching red shirts that read: "One Job Should Be Enough."

They are the workers responsible for prepping, packing, and the delivery of food served aboard flights.

The demonstration took place in front of American Airlines, the primary airline most of the workers service.

"We are getting sick. Anytime we go to the hospital we don't get no proper care and the insurance is very high and the copays are very high, I cannot afford it," Freeman added.

Matthew Bright has been employed by the German-based company LSG Sky Chefs for the last two years.

"We call it a healthcare crisis because there's so many of us that don't have healthcare," Bright said.

That point is driven even further as demonstrators staged a "die-in" inside the American Airlines terminal.

"American Airlines respects and supports the rights of workers to join a union and bargain collectively-in fact, 84% of our team members are represented by unions. We believe in the collective bargaining process, and so we are confident that LSG Sky Chefs and Unite Here will come to an agreement that increases pay and benefits for LSG's employees and ensures LSG can continue to operate successfully. We understand that a new contract will, ultimately, increase the costs to LSG Sky Chef's customers, including American. While we are not part of the ongoing negotiations, we urge both LSG Sky Chefs and Unite Here to bargain in good faith and get a deal done."

"We all have to stand up and support each other in these times otherwise the rich corporations are going to walk all over everyone," said worker Rachel Kleinbaum.

Workers say the airlines have now been put on notice, saying the next move is theirs.