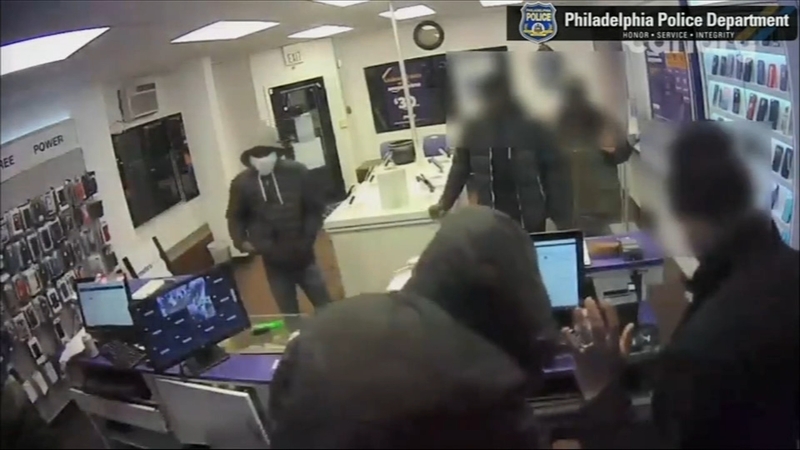 PHILADELPHIA (WPVI) -- Police are investigating two robberies of Metro PCS businesses in West Philadelphia that could be part of a larger pattern in the area.

This pattern started in early November. Police say there have been about seven armed robberies at the phone stores just here in West and Southwest Philadelphia, but they have hit other Metro PCS stores elsewhere in the city. Some stores twice.

We talked with one store owner who came face to face with the armed robbers while working alongside his pregnant wife.

"All I see is just two guys rushing in the door. By the time I looked, one of them was already behind the counter," he said.

That's the voice of the owner of the Metro PCS store in the 4400 block of Chestnut in West Philadelphia. On November 23, two armed men barged into his store where he was working with his pregnant wife.

"She wasn't supposed to be with me that day. And she came to help out because my employee didn't, she called out. She couldn't come. And she said it's Black Friday, I can help you out. And look what I put her through," the victim said.

What he and his wife went through is what other Metro PCS employees have experienced over the last few weeks.

Another video is from 726 South 52nd Street on November 27. Two men came into the store, pointed guns, and demanded cash and phones.

Philadelphia Police Captain Frank Milillo said, "Yeah, they've been very active. Hopefully, with the video, we put out, we're trying to get the public to help us recognize and identify these people."

These are videos police put out prior of similar Metro PCS robberies in other areas of the city. Why Metro PCS stores?

"If I would want to guess, they see a lot of traffic in and out. They assume we carry cash even though most of our stores have like drop boxes where we actually don't have a lot of cash," said store owner.

He continued, "They get these phones. They sell them. They clone them. So it just seems to be a hot area especially around the holidays."

The owner we talked to did what police advised, put in a door buzzer and remain very vigilant.

"It's not fair. I really work hard for somebody to just come to grab from you and you can't do nothing about it," said store owner.

He's also now closing an hour earlier because it's getting dark.

Police also advise store owners not to plaster the front windows with ads so that police going by can see inside.

And for anyone, if something seems suspicious, don't hesitate, call 911 and call police if you can identify these armed men.