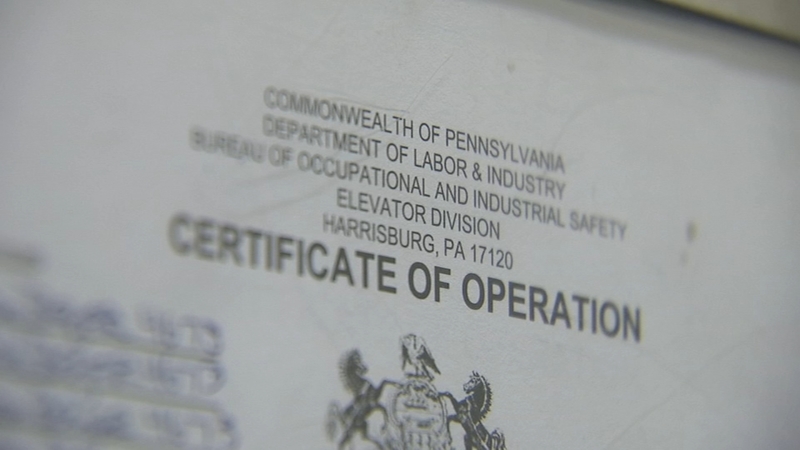 PHILADELPHIA (WPVI) -- An Action News Investigation has found an alarming number of building owners in our area are failing to get timely inspections on elevators as required by law. Records from the State of Pennsylvania show more than 1,600 elevators in the five-county region have expired Certificates of Operation.

"It just took off like a rocket. The last thing I remember doing is holding onto the railing inside the elevator," said Sheriff Paul Owens.

The elevator Owens was riding on back in August 2016 shot up 13 floors from the basement and crashed into the concrete roof of the Criminal Justice Center in Center City.

The Sheriff Deputy woke up five weeks later with collapsed lungs, broken ribs and a severed spinal cord. He is now paralyzed from the chest down.

"The way you see me now is the way I got to live the rest of my life," Owens added.

He blames a lack of real oversight by the Pennsylvania Department of Labor and Industry, which oversees elevators in the state.

"It was really disconcerting, how it got to the point where eight major bolts on a major component broke and fell off," Tinari said.

Tinari added, "I think they are just a repository for record keeping and I don't believe they have a handle on whether inspections are done or not."

By law, elevators may not be operated unless they have a Certificate of Operation. Certificates are supposed to be renewed every two years and elevators must be inspected every six months either by the department or a third party agency.

But Action News found more than 1,600 elevators with expired certificates as of the end of January in Philadelphia, Montgomery, Delaware, Chester and Bucks counties. Records from the Pennsylvania Department of Labor and Industry also show thousands more across the state.

Action News asked whether it is a problem.

"The problem is manpower not only the TPA side but also the department side," said Joe Marchioni who oversees department inspectors.

Marchioni said some of the expired certificates could be related to delayed paperwork or simply elevators no longer in service but not formally decommissioned.

How many? Marchioni couldn't say and he blamed an antiquated record keeping system.

"Do you think that affected how your guys were able to enforce or stay on top of some of these building owners?" asked investigative reporter Chad Pradelli.

"I'm sure it had some effect to it," Marchioni added.

Records show other expired certificates at Archdiocesan schools and facilities, Girard College, and at The Gap and Mitchell Gold + Bob Williams Home Furnishings which are inside the King of Prussia Mall.

Some of those certificates are now up to date after Action News began asking questions.

The Department of Labor and Industry has also now issued a warning letter to business owners out of compliance.

The state says they have the authority to issue fines admits they are rare.

The department said it would rather be proactive with having people bring things into compliance and that the elevator that crashed at the Criminal Justice Center had an up to date Certificate of Operation.

Owens said despite that, it was left up to him to investigate his accident and he still hasn't been interviewed by state investigators.

"You go on an elevator you are just assuming it is safe you never even think about it when you get on it until something happens," Owens added.