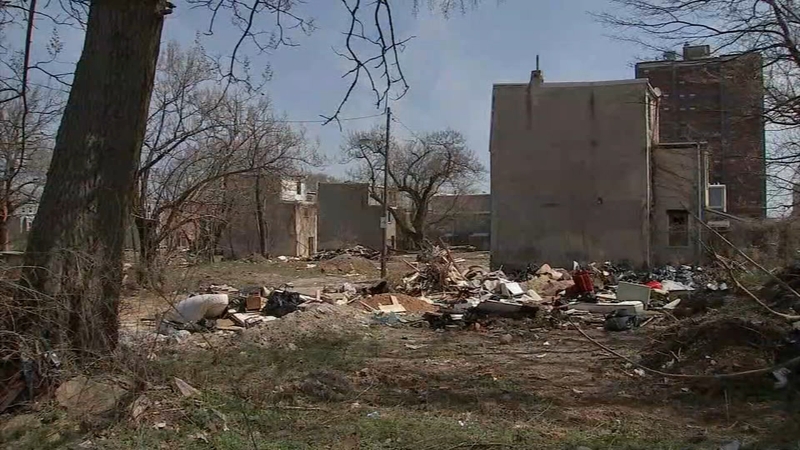 PHILADELPHIA (WPVI) -- Frustrated neighbors say they have been calling for months to Philadelphia's 311 help number and have gotten little help.

Their problem: short dumping on adjoining vacant blocks of the 2400 blocks of Nassau, Bolton and Redner Streets in the Sharswood section of North Philadelphia.

There is a lot of nearby demolition and construction sites and neighbors think waste from some sites is being illegally dumped on the vacant land.

Resident Jon Sanborn showed us around the sprawling piles of tires, bricks, furniture and lumber. He showed us videos shot from his home office window of beat up old trucks dumping loads of debris. He says it occurs several times a week.

Saliyma Muhammad looks out the back of her new house onto the growing piles of trash, "It's been piling up bigger and bigger every day."

Sanborn blames "fly by night contractors with their construction materials that have essentially turned this area into a mini -dump."

The mini-dump is on property owned by the Philadelphia Housing Authority.

Sanborn says he and others have reached out to PHA and City Hall months ago. But Sanborn says little happened until today when a city cleanup crew arrived. Unfortunately, it had equipment problems and had to go back to the garage.

A frustrated Sanborn wonders does the city or PHA have any plan to stop the next short dumper who comes along.

He said, "It is great they are out here cleaning up but as soon as these guys leave I will bet you someone is going to come by and dump."

She says she is outraged by what has happened on the PHA property.