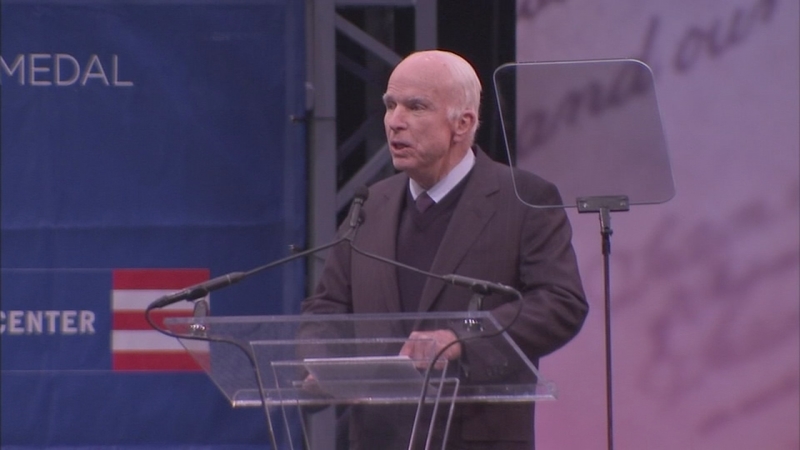 PHILADELPHIA -- When U.S. Sen. John McCain was a younger man, once or twice he was tasked with carrying Joe Biden's luggage.

On Monday, after Biden, the former U.S. vice president, awarded McCain with the National Constitution Center's Liberty Medal, McCain was sure to let everyone know he hadn't forgotten.

"I've resented it ever since," McCain said on the lawn of the Philadelphia museum as he accepted the award for his lifetime of sacrifice and service to the country.

Biden, along with a host of academics, politicians and business people, recalled McCain's more than two decades of military service, his time in a prisoner of war camp in Hanoi, Vietnam, and his long career as a statesman.

Many of the speakers, including McCain, who recently revealed that he has been diagnosed with brain cancer, lamented what they described as a recent rejection of America's role as a world leader, though no one mentioned any names.
McCain, who joined the Navy in 1958 and rose to the rank of captain during his 22 years of service, couldn't resist going a bit further than everyone else.

"To abandon the ideals we have advanced around the globe, to refuse the obligations of international leadership for the sake of some half-baked, spurious nationalism cooked up by people who would rather find scapegoats than solve problems," he said, "is as unpatriotic as an attachment to any other tired dogma of the past that Americans consigned to the ash heap of history."