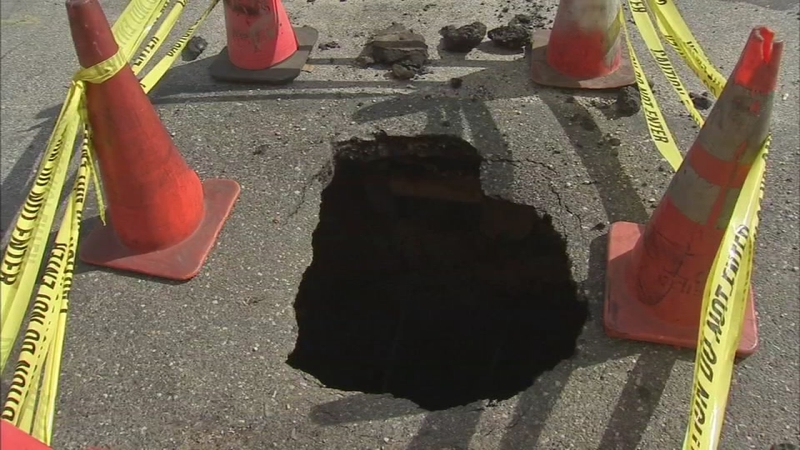 It happened after 11 p.m. on the 3100 block of West Norris Street in Philadelphia's Strawberry Mansion section.

Man falls what he says was 8 feet, through a sink hole as he was trying to put back cones around the gaping hole @6abc pic.twitter.com/7I9riC5lcv

In a cell phone video, you can hear Eugene Clarke's wife screaming for her husband trapped several feet after falling through a sinkhole.

Clarke says he went to put back cones that a car had knocked down around the safety hazard.

"I was very terrified. It was quick, it happened fast. I stood over there, trying to put the piece and straddle my feet over the hole, and it opened up and I just went in," he said.

"I hear him screaming my name, and all I want to do is jump in the hole," Sasha Clarke said.

Rescue workers were able to retrieve Clarke less than an hour later. His ankle, wrist and lower back injured. He's confined to crutches.

"I fell in that hole, I'm sore! I wouldn't have fallen if they had put a cover on it,"
Clarke said.

The water department says they were notified of a potential leak in the street last Thursday, and that a sewer maintenance crew will be out to do an inspection later this week.

But in the meantime, Clarke worries the cones are not enough.