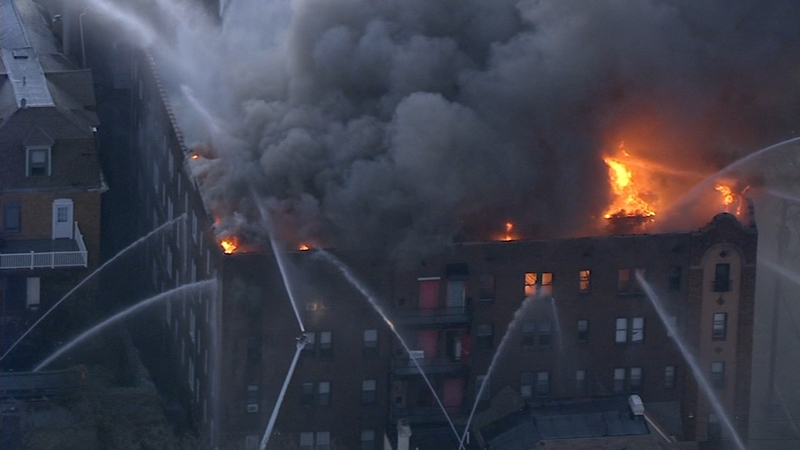 PHILADELPHIA (WPVI) -- After six hours of battling heavy flames and icy conditions, close to 200 firefighters were able to place a 5-alarm apartment fire under control Monday, but not before dozens of people were displaced from their homes just weeks before Christmas.

Officials said the fire began on the fourth floor of the Overbrook Gardens apartments on the 900 block of North 63rd Street around 2:15 a.m. It continued on to burn through the roof, causing massive structural damage.

"I have nothing but the clothes on my back," said Barracks.

But with a new apartment lined up, she is upbeat and says she is more blessed than many others who spent last night with her in a Red Cross emergency shelter.

"I am just hoping a lot of other families that probably aren't coping with it as well [as I am] I hope they get the aid and help that they need," she said.

The top floor is still considered too unstable for fire investigators to enter. Their job to determine the cause of the blaze.

Some lower floors of the building were deemed stable and officials allowed a Red Paw relief team to enter on Tuesday.

Team members found several pets, including a turtle in an aquarium, which was reunited with its grateful owner.

By late morning donations began to arrive. A woman from Bryn Mawr said she saw on the news where dozens were displaced and brought many items to the scene for those in need.

"The first thing I thought about it was they are going to need clothing and I had started a collection so then I went thru my closet and added more to it and brought a nice bag of nice winter coats and sweaters," said Catherine Swan-Gross of Bryn Mawr.

After some initial confusion authorities are now asking donations to be dropped off at Salvation Army donation centers in either Manayunk or Collingdale, where they can be checked and sorted.

The Salvation Army will also be providing gift cards for fire victims to shop at their thrift stores.