With Realmuto joining Phillies, could Harper or Machado follow? 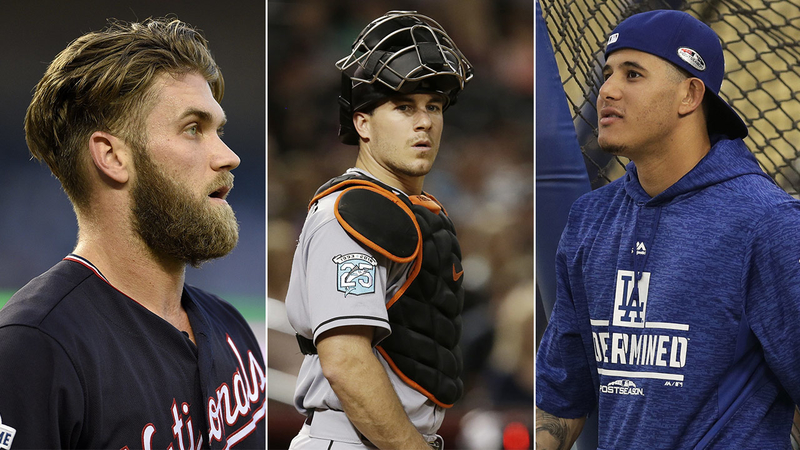 The Philadelphia Phillies, perhaps growing impatient waiting for Bryce Harper and Manny Machado to choose their landing spots, maybe sensing that neither wants to play in Philadelphia, or possibly even looking to make the team that would surround Harper or Machado that much more attractive, acquired All-Star catcher J.T. Realmuto from the Florida Marlins in exchange for catcher Jorge Alfaro, minor league pitchers Sixto Sanchez and Will Stewart and an international bonus slot.

Whether this is the big move or the move before their signature move, this is a major upgrade for the Phillies. Realmuto led all major league catchers in 2018 with 4.3 Baseball-Reference WAR (4.8 on FanGraphs). Before the trade, the duo of Alfaro and Andrew Knapp projected as next-to-worst in the majors with 1.1 WAR, so this looks at least like a three- to four-win upgrade for the Phillies, at least on the offensive side of the ball.

Realmuto hit .277/.340/.484 with 21 home runs in 125 games for the Phillies, but his numbers should spike going from Marlins Park to Citizens Bank Park. His OPS was nearly 100 points higher on the road in 2018 -- .870 versus .773 - and more than 200 points higher over the past three seasons (.887 versus .682). Assuming he maintains his power production from last season, he should be a 25-homer guy in hitter-friendly Citizens Bank. ESPN Stats & Information reports that Realmuto's slugging percentage on fly balls was 41 percent below average at Marlins Park over the past three seasons, but 17 percent above average in all other parks.

Given his speed (he's an above-average runner and the fastest catcher in the game) and on-base skills, he slots in nicely at the top of the Phillies' lineup that now looks something like this:

Realmuto is under team control for two more seasons and the Phillies would certainly try to sign him to an extension. He has also become one of the top defensive catchers in the game. His average pop time on throws to second base of 1.90 seconds led all catchers in 2018 and his pitch-framing metrics have also improved to above-average the past two seasons. He didn't win a Gold Glove, but he's a strong candidate to win one in 2019.

Acquiring a catcher of this ability via trade is -- as you may guess -- extremely rare. Good catchers are difficult to find and if you have one, you tend to hoard him like a puppy with his new chew toy. The last catcher traded coming off a season of at least 4.0 bWAR was A.J. Pierznyski in the 2003-04 offseason, when the Twins traded him to the Giants for Joe Nathan and Boof Bonser.

The catcher position is also extremely weak across the majors at this time, at least offensively. Catchers combined for an OPS+ of 87 in 2018, their lowest collective figure since 2001. In other words, this move is arguably the biggest move a team has made this offseason. Before the trade, I had the Phillies a clear fourth in the NL East behind the Nationals, Braves and Mets, and this trade puts them right up there with the Braves and Mets.

That also means there is room for improvement, and that could still mean signing Harper or Machado. That lineup above is nice, but now let's imagine it with Bryce Harper in it. They are also obviously down on Maikel Franco, and Mike Moustakas would be about a two-win upgrade over Franco while providing better balance to the offense since he hits from the left side. So the Phillies are not far away from Gabe Kapler being able to fill out a lineup card that looks like this when they open against the Braves on March 28:

That would send a pretty clear message that Philadelphia is serious about taking the top spot of the NL East away from Atlanta.

Or maybe the Phillies use money earmarked for Harper or Machado on some combination of Dallas Keuchel. Signing Keuchel would give them one of the deeper rotations in the league:

With that group, Vince Velasquez could move to the bullpen where he could be a multi-inning threat, helping set up David Robertson and Seranthony Dominguez.

To get Realmuto, Matt Klentak did what the Dodgers or Astros wouldn't do: Surrender their top prospect. Sanchez is a hard-throwing right-hander who made just eight starts in 2018 due to elbow inflammation but still ranked No. 35 on Keith Law's top 100 prospects. In his report on Sanchez, Law begins: Sanchez throws what might be the easiest 100 mph fastball in pro baseball, and he does so from a small, 5-foot-10 frame (despite being officially listed at 6 feet) that makes it hard to believe you saw what you just saw when he does it.

It's a high-risk profile, but there is ace potential. Alfaro is a similar player with loud tools. We've been hearing about him forever -- he was a top 100 prospect for five seasons -- and he finally played his first full season in the majors, hitting .264/.324/.407. Trouble is, that came with an awful 138/18 strikeout-to-walk ratio, and Alfaro's lack of plate discipline has always prevented him from fully tapping into his power. That .264 average is also unsustainable given his current approach since it resulted from a .406 BABIP -- 19 points higher than anyone else in the majors. Because of that he projects as a sub-.300 OBP hitter, and if even he improves on defense that low OBP is always going to hold down his value. Really, the upside is a Mike Zunino-type with power, low OBP and good defense. That's not a bad player, but it pressure on Sanchez to come through to make the trade work for the Marlins.
-----
Follow us on YouTube
Send a News Tip to Action News
Learn More About 6abc Apps
Report a correction or typo
Related topics:
sportsaction news sportsphiladelphia philliesphillies
Copyright © 2022 ESPN Internet Ventures. All rights reserved.
PHILADELPHIA PHILLIES
Former Boston Red Sox slugger David Ortiz lone inductee into Baseba...
Sources: MLB makes first labor proposal since lockout, awaits union...
Report: MLB payrolls drop 4% to 2015 levels
Detroit Tigers first-base coach Kimera Bartee dies at age 49
TOP STORIES
AccuWeather: Cold Blast Today, Weekend Snow
Supreme Court Justice Stephen Breyer to retire
Eagles' Brandon Brooks announces his retirement
Officer dragged half a mile during Philadelphia traffic stop
CHOP KOP: New pediatric hospital now open
What to know about tensions between Russia, Ukraine
Parents share story of infant's day care abuse to help others
Show More
Remembering Kobe Bryant 2 years after his death
2 seriously injured in multi-vehicle crash in South Jersey
Scientists monitoring new omicron subvariant BA.2
Philadelphia officer says murdered son had big dreams
$5M lottery ticket sold at Bucks County Wawa
More TOP STORIES News