Aaron Altherr gets walk-off 2B, Nick Williams gets ball bounced in face 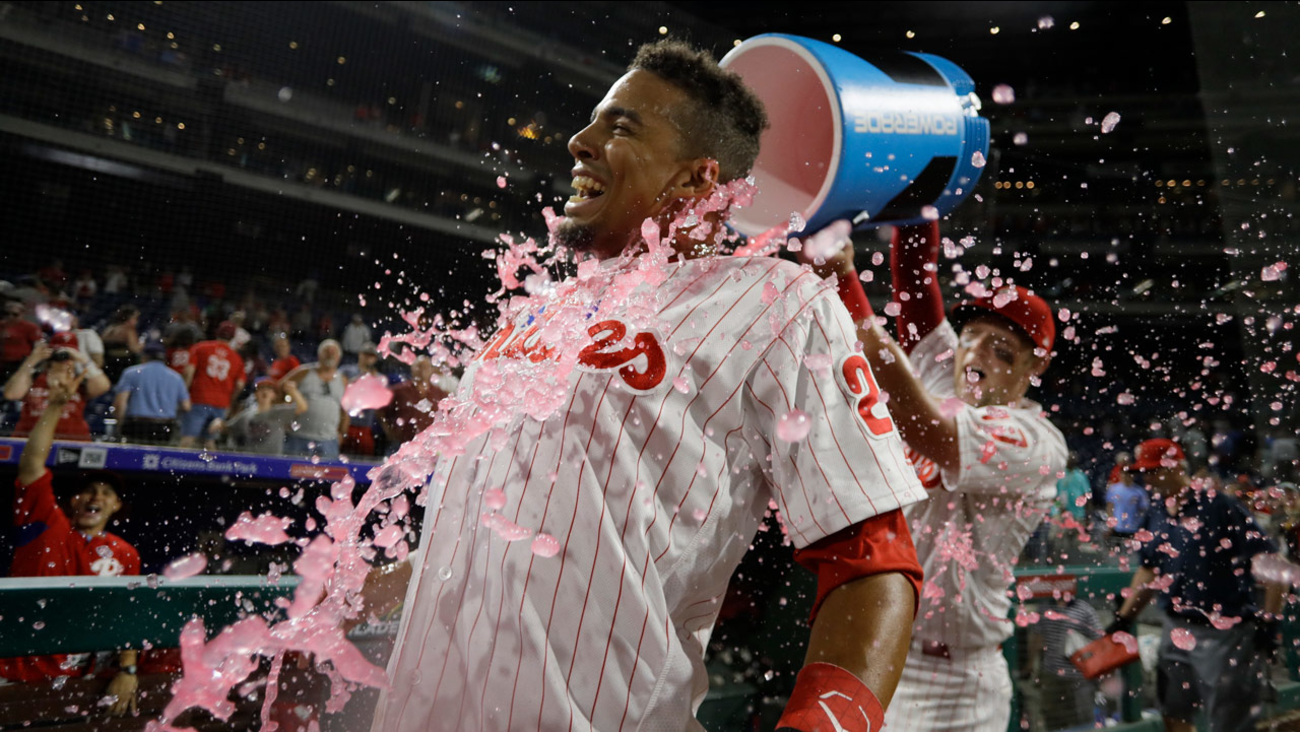 PHILADELPHIA (WPVI) -- Left fielder Marcell Ozuna dived for and missed Aaron Altherr's two-run double with two outs in the 10th inning, allowing the Philadelphia Phillies to rally for a 6-5 win over the St. Louis Cardinals on Monday night.

Tommy Pham hit a solo homer in the top of the 10th, one inning after a wild pitch on a strikeout kept the game going. But the Phillies rallied.

Rhys Hoskins hit a bloop single to start the bottom of the 10th off Matt Bowman (0-2). Odubel Herrera dived headfirst into first to seemingly beat out an infield single, but the play was overturned by a video review. After Carlos Santana was intentionally walked, Bowman struck out Jesmuel Valentin.

Altherr then hit a sinking liner that appeared to skip off Ozuna's glove before bouncing to the wall.

On a day former closer Hector Neris was sent to the minors, Phillies manager Gabe Kapler's aggressive use of the bullpen nearly cost him. Seranthony Dominguez - the team's best reliever - wasn't available after pitching 2 1/3 innings in the previous two games. So Kapler turned to Victor Arano and Adam Morgan in the ninth to protect a 4-2 lead. Neither pitcher has ever earned a save.

Yadier Molina hit a one-out single in the ninth off Arano, and Jedd Gyorko followed with a double. Arano struck out Harrison Bader and fanned Yairo Munoz, but Munoz reached when catcher Andrew Knapp failed to block the wild pitch and a run scored.

Morgan came in and allowed a tying single to Kolten Wong.

The Phillies' bullpen wasted a strong start from Nick Pivetta. He had a career-high 13 strikeouts, allowing two runs and four hits in 7 1/3 innings in his best outing since May 21. Pivetta lost his previous four starts, posting a 7.11 ERA in those games.

Pivetta left after Carpenter hit a double high off the fence in right to put runners at second and third. Right fielder Nick Williams exited with a bloody face after the ball hit him on the carom.

Philadelphia Phillies right fielder Nick Williams reacts after being hit by the ball on a double by St. Louis Cardinals' Matt Carpenter.

Edubray Ramos entered and struck out Pham and Jose Martinez swinging at sliders.

Neris was optioned to Triple-A Lehigh Valley, and lefty Austin Davis was recalled. Neris had a 6.00 ERA in 30 appearances, going 1-3 with 10 saves in 13 chances.

CARDINALS: 1B Martinez returned to the lineup after missing three games on paternity leave. 1B Luke Voit was optioned to Triple-A Memphis.