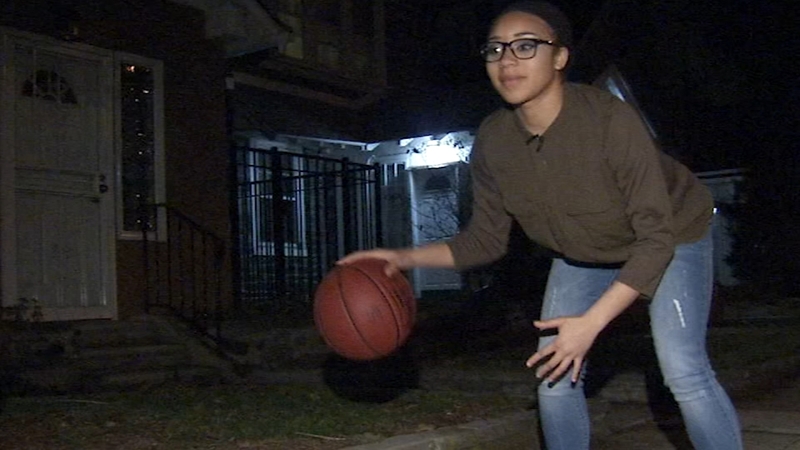 PHILADELPHIA (WPVI) -- She says she has been playing basketball while wearing her hijab on for years, but this weekend Nasihah Thompson-King was benched from the Mastery Charter Schools team for not taking off her religious headdress.

"The ref came over and told me I couldn't play because I didn't have the paper to wear my hijab," said Nasihah. "I was upset and embarrassed."

Anything worn on the head for medical or religious purposes must be approved by the Pennsylvania Interscholastic Athletic Association.

And in fact, her coach had been warned of the need for a waiver two days before the game.

By all reports, the official appropriately enforced the rule in making Nasihah sit out, but Executive Director of Athletics for Philadelphia Schools Jimmy Lynch said that the waiver is an unfair requirement.

"Yes, could the waiver have been filled out? Sure. But is it an extra step that our students of different faiths have to do if they're wearing different garments? Yes! And I don't think that's fair," Lynch said.

The district is calling for a religious exemption, as the hijab doesn't alter the sport or provide a competitive advantage.

It says: "they should always be eligible to play. Any religious garment worn with a game uniform should never prevent [the player] from participating in a game."

Nasihah's mother Fatima Thompson says an exception should not be made for her daughter, but the rule simply should not exist.

"I absolutely believe that rule needs to be abolished," said Fatima. "Not just for my daughter, but for anyone who is choosing to honor their religion."

Nasihah said she just hopes that PIAA will come to its senses and remove the waiver requirement.

"It's unnecessary to have to sign a waiver to cover up. That's a part of our religion," Nasihah said.

Mastery issued the following statement, calling on the PIAA to abolish the rule:

"Our Muslim students should not be required to seek a waiver to wear a hijab when participating in high school sports. We urge the PIAA to reverse the rule immediately and send a message that student athletes of all faiths are welcome in Pennsylvania," said Mastery Charter Schools CEO Scott Gordon.