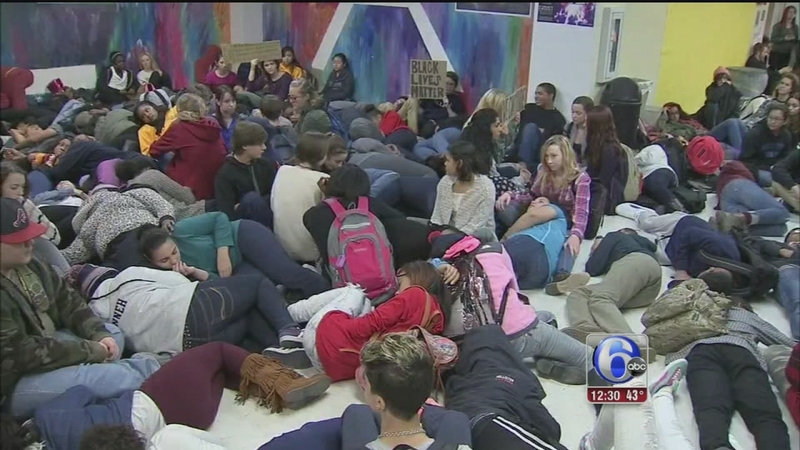 PHILADELPHIA (WPVI) -- Students at 3 Philadelphia high schools staged what have become known as "die-ins" to protest the grand jury decisions in Ferguson and New York City.

The protests took place through the day Friday.

Action News was at the Science Leadership Academy, where students joined a collective group of students across the city to protest what they perceive as injustices in Ferguson, Missouri and New York City.

The teens say the Michael Brown and Eric Garner cases compelled them to act.

"Hopefully people will see this and do the same thing," said one girl. "Hopefully it will just spread all over. We're just hoping more people take heed over what happened and get justice for it."

"I think a lot of teenagers, especially nowadays, are very open to the idea of talking about racial issues," said another.

Photos from Friday morning's "die-in" at Masterman High School showed a combination of different races and ethnicities taking part in that demonstration.

Another protest was scheduled to get underway Friday afternoon at Central High School in the Olney section of Philadelphia.

Friday morning's protests were peaceful, quick and monitored by a small contingent of police.

The teens said the Michael Brown and Eric Garner cases compelled them to act.

"I was extremely moved and felt extremely powerful to be sitting there with my peers to know that they care so deeply about this, and are as passionate about improving our society," said Masterman student Jenny Gobreski.

"We have support from all different kinds of people, different ethnic backgrounds, different social backgrounds. It really means a lot, and the turnout was large and not expected," said Masterman student Amijah Townsend.

"I just felt like I had to do something," said Todd Parks. "I had to be part of the movement to show that this is not right. So I texted Jenny, like, we have to have a 'die-in' at our school."

That said, there is a segment of the U.S. population that believes if you look at all the grand jury testimony and evidence, that while these killings were unfortunate, they were justified.