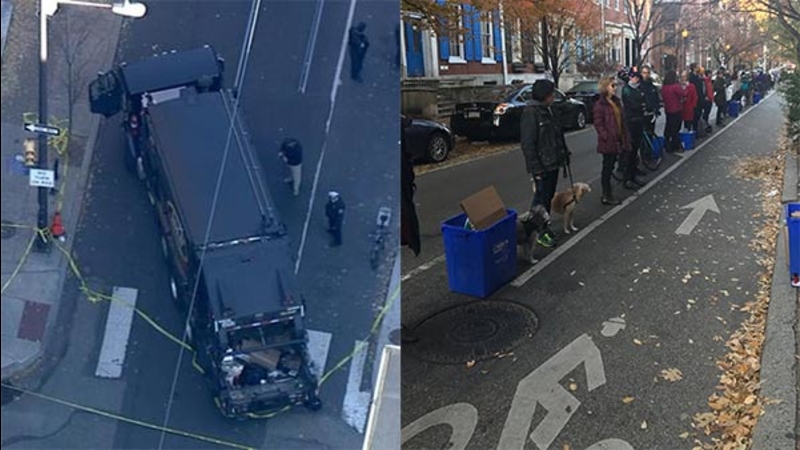 CENTER CITY (WPVI) -- Philadelphia police have identified the bicyclist who was killed when she was hit by a trash truck in Center City.

The victim has been identified as 24-year-old Emily Fredericks.

On Wednesday, cyclists protested at the scene, calling for more protection for bike lanes.

The line stretched more than a block, protesters creating a human buffer between the bike and traffic lanes on Spruce Street, near the site of Tuesday's fatal accident.

"We are physically putting ourselves, our bodies, in the space where we are asking the city to build safer infrastructure," said protester Leigh Goldenberg.

The protest began around 7:30 a.m. Wednesday.

A day earlier, almost exactly to the minute, 24-year-old Emily Fredericks of South Street was hit by a garbage truck turning right onto 11th Street. The driver did stop.

The Bicycle Coalition of Greater Philadelphia (BCGP) says Fredericks is the third bicyclist killed in the city this year.

The circumstances surrounding the crash remain under investigation, but the protesters are calling for more protective measures for cyclists, here and throughout the city.

"There are flex posts, concrete barriers, parking lanes (that could be placed) between the driving cars and the cyclists in bike lanes," said Goldenberg. "All of those would have closed the bike lane, made more visibility for the driver."

"Bikers have their part, too," said Megan Rosebach of BCGP. "But at the end of the day, motorists are driving large vehicles that are going to kill a cyclist. Cyclists aren't going to kill a motorist."

Over the course of the protest, officers initially blocked the bike lanes a block ahead of where the crash happened, then eventually closed down Spruce to vehicular traffic, citing the safety of the protesters.

City spokesperson Mike Dunn called the event a tragedy, but couldn't comment on the incident due to the ongoing investigation.

He did say, in part, "We can say that the bicycle lane on Spruce Street was due to be restriped next month. The city is committed, through its Vision Zero program, to expanding the city's bike lane network, particularly protected bike lanes."

Police identify cyclist who died in crash at 11th and Spruce as 24 yr old Emily Fredricks. Police say trash truck was turning right onto 11th when driver realized he hit her. pic.twitter.com/U9dsRYwwFA

Some nearby pedestrians said there needs to be more cooperation between everyone on the road.

"Mistakes happen, but people have to work together instead of blaming," said Ito Rosario of North Philadelphia.

"Everyone needs to be more aware," said Danielle Klinges of Society Hill.

A vigil was set for 5 p.m. Wednesday at the crash site.