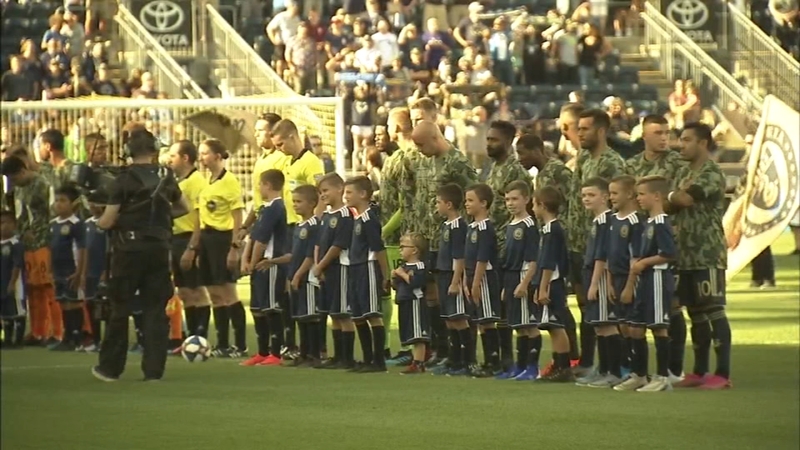 CHESTER, Pennsylvania (WPVI) -- The Philadelphia Union teamed up with Toyota to honor the men and women of the military during Sunday night's game against the Houston Dynamo.

On Toyota Plaza, there were various events for military families. Players wore limited-edition military-inspired warm-up tops from Adidas, and the Union Shop sold a small quantity of tops along with military-themed scarves and hats.

Before the match, the West Point Parachute Team descended on the field delivering the game ball.

Ahead of tonight's game, Operation Yellow Ribbon ran a military care package collection drive on the Toyota Plaza. Fans brought hand-written letters to go with the items when they are shipped to military members overseas.

Union season ticket holders, Donna and Bill Franz of Glenolden, were one of the first to fill care packages.

"We like to give back to the military for all they sacrifice for us and do for us, it's the least we can do," said Donna Franz.

President of Vineland Toyota, Bob McCormick, a proud sponsor of the event, handed out ball caps.

Toyota is proud to continue to support the Hiring Heroes Campaign which focuses on employing military veterans.

"The fact they give so much and they need to be recognized more so than ever now because of everything they have done," said McCormick.

Former under secretary of the Army and former congressman Patrick Murphy stressed how important appreciation events like these are important to military families.

"We're in the longest wars right now in American history in Iraq and Afghanistan. We have over 14,000 troops in Afghanistan tonight and to know were asking less than 1% to serve and when they come home to open arms here at Philadelphia Union's stadium to make it a family affair," said Murphy.