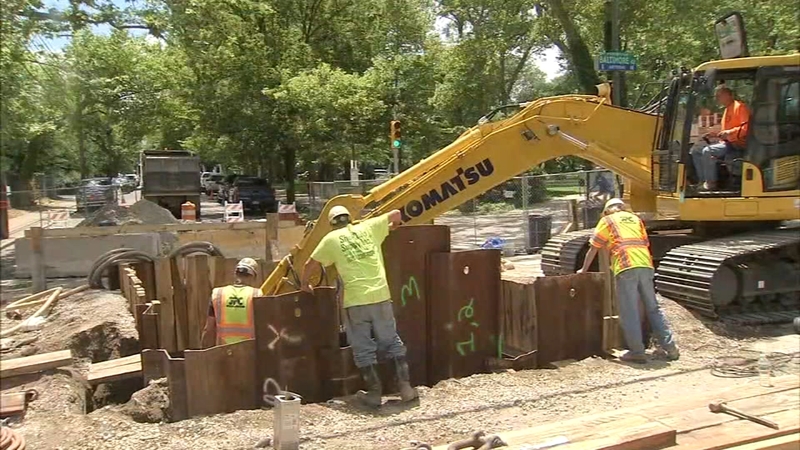 Since last summer, Sansom street between 13th and Broad streets has been closed to vehicle traffic for almost an entire year. However, it is expected to reopen soon.

The news came from John DiGiulio a spokesperson with the Philadelphia Water Department. He said Friday, "We are hopeful we can have the street open in a week or so."

Sometime before 4 a.m. on July 3, 2018, a century old 48-inch water transmission main buried 25 feet beneath the intersection of Sansom and Juniper streets ruptured.

It sent a virtual river of water gushing through blocks of Center City. In the three hours it took to shut down the flow it is estimated about 14 million gallons emptied onto the streets.

Once the water stopped, it was discovered the intersection had caved in damaging other underground utilities in the area.

DiGiulio says that meant there had to be major rebuilding effort from the ground up. Peco, PGW, the streets department, AT&T and Verizon were all involved.

Kate Moroney, the Director of Operations for Time restaurant located in the 1300 block of Sansom said she is looking forward for the reopening of the street. Time's basement had more than five feet of water in the immediate aftermath of the flooding.

The restaurant was closed for a month. Since then while the sidewalks are open, she says some people look at the shutdown street and think businesses remain closed.

She estimated casual walk-ins for happy hour are probably off by about 40% from past years.

She said, "We are thrilled to have the street re-opening soon."