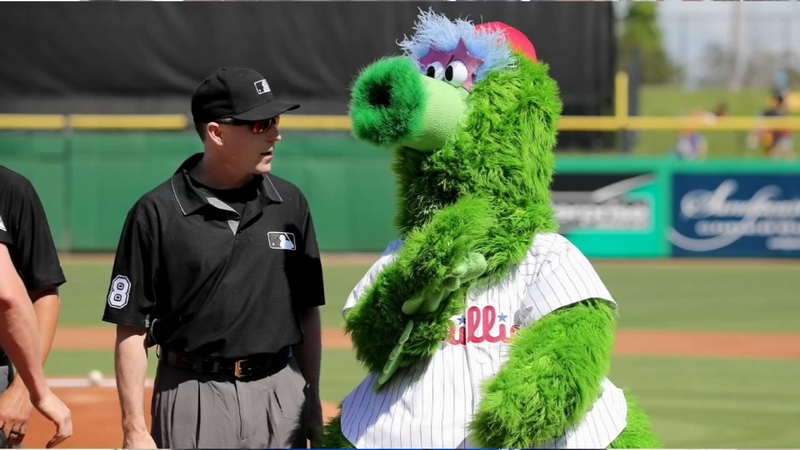 PHILADELPHIA (WPVI) -- It's not baseball season yet, but many people can't seem to stop talking about the Phillie Phanatic's new look, as the original creators have voiced how disappointed they are.

The change follows the Phillies suing the company that created the Phanatic last August from reclaiming the copyright.

RELATED: 'I stand with Phanatic:' Gritty defends Phillies mascot's new look
The firm helped develop the Phanatic and was playing hardball with the Phillies to pay up millions of dollars to keep him or the beloved mascot could enter into a sort of "free agency."

The original creators have now put out a statement.

Here's the statement from Bonnie Erickson and Wayde Harrison:

The creators of the original Phillie Phanatic, Bonnie Erickson and Wayde Harrison (who are represented by law firm Mitchell Silberberg & Knupp LLP), expressed their dismay at the appearance Sunday of the so-called "new" Phillie Phanatic at the Phillies spring training game:

"The Phillies lack of good faith in negotiating for an extension of the copyright assignment for the Phillie Phanatic is disappointing," said Wayde Harrison. "But the unveiling of the so-called 'new' Phanatic on Sunday is an affront to our intellectual property rights and to Phillies fans everywhere."

"For more than 40 years, we have worked closely with the Phillies, making all the Phanatic costumes, providing artwork and ideas until June of 2018," added Bonnie Erickson. "The Phanatic has performed successfully for the Phillies and the city of Philadelphia for decades. The 'business decision' by the Phillies to roll out this 'new' Phanatic is a transparent attempt to deny us our rights under of the Copyright Act. We would love to have the real Phanatic continue with the Phillies."
GALLERY: Phanatic Through the Years


Some people Action News spoke with said they have mixed opinions.

"Leave him the way he is and just drop the lawsuit," said Thomas Kaplan, from Fishtown.

"It is a fair thing," said Brendan Olkus, from Fishtown. "The franchise has made a lot of money over the years, it's kind of a fair thing to take care of the artists for it, I think they designed the iconic baseball mascot."