Philadelphia police officer shot in line of duty: "I was extremely lucky" 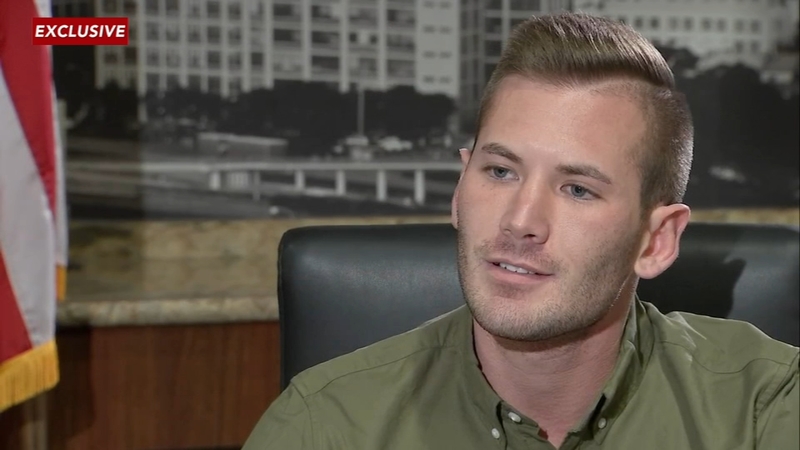 Philadelphia police officer shot in line of duty: "I was extremely lucky"

PHILADELPHIA (WPVI) -- Officer Paul Sulock is considered a hero to many. He was shot in the leg nearly a month ago while on patrol in the Kensington section of Philadelphia, and still managed to chase down a suspect.

As he told Action News in an exclusive interview, the father, husband, and son of a police officer has much to be grateful for this holiday season.

The 31-year-old Sulock is well aware he might not have survived what happened in Kensington last month.

"I was shot in the right thigh. It either went in lower and came out higher or went in higher and came out lower. Nobody really knows. It missed my femur bone, which I was extremely lucky," he said.

The shooting happened just after 11 a.m. on November 7.

Officers citywide responded upon hearing Officer Sulock's voice go out over their radio. He had been shot when he and his partner apparently interrupted a confrontation between two armed men.

"I think your training takes over and adrenaline kicks in, and it just, you know, you don't really realize it right away until things are calming down that you realize that you were shot," he said.

His leg bleeding, Officer Sulock still was able to pursue one of the suspects and make an arrest.

"I love chasing people. I can't get enough of this job. I didn't want either of them to get away obviously. I am just doing my job. That's all," he said.
His wounds are still healing, and he has physical therapy ahead, and yet he can't wait to get back on patrol.

"I look forward to getting back to work like January, February," he said. "I love going to work."

On Sunday night, a few hundred people gathered at the FOP to raise money to help Officer Sulock and his family. He is beyond grateful for all the support he's received.

"My kids are lucky. They have a happy and healthy dad who will be home this Christmas. I can't thank all these people enough. It brings tears to my eyes what they did for me and my kids are going to have a great Christmas because of it," he said.

Jerome Hill is charged in connection with the shooting. Officer Sulock told us he had come across Hill on prior occasions while on patrol.

He'll face him yet again down the road when the case goes to court.