Police: Killing of 15-year-old boy in Kingsessing appears to be a random act of violence 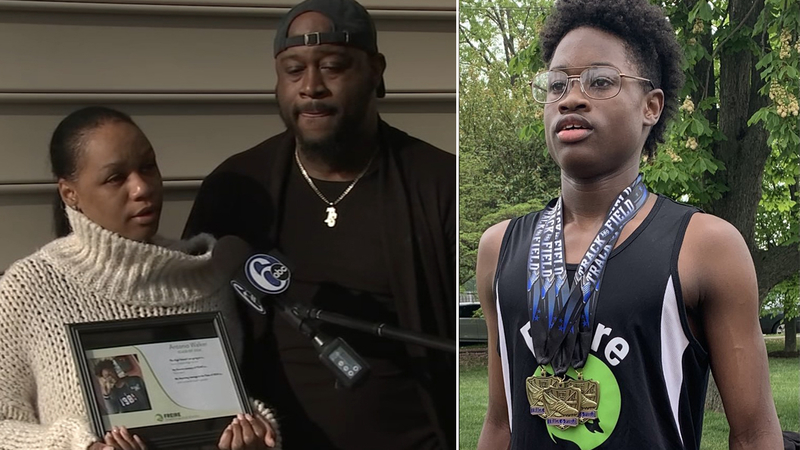 Police: Killing of 15-year-old in Kingsessing appears to be random

PHILADELPHIA (WPVI) -- Philadelphia police say the killing of a 15-year-old boy on Tuesday night in the city's Kingsessing section appears to be a random act of violence.

Antonio Walker Jr. was shot shortly before 7 p.m. on the 5200 block of Pentridge Street.

In a news conference on Wednesday afternoon, Capt. Jason Smith said Walker was playing basketball with his 14-year-old cousin when they heard gunshots.

As the teens tried to take cover, Smith said they saw a car coming at them with an arm extended out the rear driver's side window.

“His future was so bright.”
Antonio Walker Jr’s parents say they don’t want him remembered as just another homicide victim in Philadelphia.
They say he was a track star at Freire Charter, made the honor roll and did not hang out in the streets. More on this story @ 1230 on @6abc pic.twitter.com/B1X9joYz5y

That's when more shots were fired and Walker was struck.

Smith said laughter could be heard coming from inside the vehicle.

"This appears to be an indiscriminate shooting," Smith said. "At this time we have no reason to believe these two kids were actually targeted."

"It is a disturbing trend that we're seeing over and over again in Philadelphia," he said.

"The duty to protect these children belongs to all of us. The public has my full assurance that the Philadelphia Police Department is doing everything possible to curb gun violence in the city," she said.

"His future was so bright"

Antonio's parents said the gun violence he fell victim to had nothing to do with who he was as a person.

"The loss of a kid, I will be mourning for the rest of my life," said his mother, Nydisha Williams.

"No parent should ever have to bury a kid. That's my only son," Antonio's father said.

“His future was so bright.”
Antonio Walker Jr’s parents say they don’t want him remembered as just another homicide victim in Philadelphia.
They say he was a track star at Freire Charter, made the honor roll and did not hang out in the streets. More on this story @ 1230 on @6abc pic.twitter.com/B1X9joYz5y

"Yesterday was one of the first nice days that we had in a while," Williams said. "And it's crazy because I was interviewed eating at restaurant yesterday and my son wanted to go hang with his cousin and I felt nothing wrong with that."

His parents said he was dedicated to school, his physical health, and did not hang out in the streets.

"All he wanted to do was get back to school, finish his education and become the professional athlete that he was. He worked out every single day," Williams said.

His mom said he was a 9th-grade track star at Freire Charter School in Center City. She wants him to be remembered that way, rather than just another number.

"My son is another number of this large rising number of homicides. My son is part of that number. It's devastating," Williams said, "His future was so bright, so bright."

Investigators said they did not find a weapon and are working to gather more clues.

Officials from Freire Schools issued a statement on the loss of Antonio. It reads:

Antonio was a friend to all and an old soul-- he had a wisdom to him that truly made him stand out. He was authentic-- always himself, always honest, always real.

Antonio shone inside and outside the classroom. He was an active participant in his classes and an avid debater. He had a style all his own-- that mohawk was fire, always! He was actively working on his clothing line. He loved animals and had recently become a vegetarian.

Antonio loved track and his track teammates. He was a member of Freire's first Boys' Track Championship Team. The last time we were able to hold track meets in person, he took home four gold medals-- in the 4x100, 4x400, 200, and 400. He was the anchor leg for the Penn Relay team in 2019 that finished 5th overall.