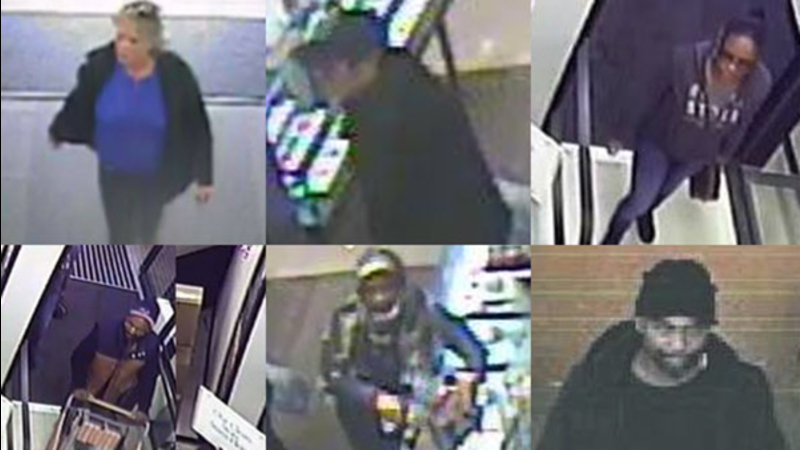 CHERRY HILL, N.J. (WPVI) -- Police in Cherry Hill, New Jersey say there have been multiple cases of pickpocketing there recently, and in one case the victims' credit cards were used for $14,000 in fraudulent purchases.

Investigators have released photos of six suspects in this case.

The victim in the most extreme case had her wallet stolen while eating at a Panera restaurant on November 26th. Her credit cards were used at Nordstrom and the Apple Store for charges totaling $14,337.90.

Cherry Hill Police say they have eight cases in all within the last month. Investigators say the thieves have two methods of operation: In one scenario, a crook distracts a shopper while a partner reaches into a purse on a shopping cart.

"The second is an unattended purse, whether its inside a shopping cart, or left unattended, or on the back of a chair in a restaurant," said Sgt. Richards Humes.

Police say almost all of victims are women, so they recommend you keep your purse connected to your body and never leave it unattended, even for a split second, because you never know who's watching.

On November 5th, police say a victim had her wallet stolen while shopping at the Wegman's store. Her cards were used at Best Buy and Walmart for a total of $2,302.56.

On November 20th, police say a victim had her wallet stolen while dining at Bahama Breeze. Her cards were used at Macy's and Target for a total of $769.05.

On November 26th, police say a victim had her wallet stolen while shopping at the Christmas Tree Shops. Her cards were used at Total Wine for $335.87

Anyone with information is asked to call Det. Kenniff at 856-432-8834 or email dkenniff@cherryhillpolice.com.