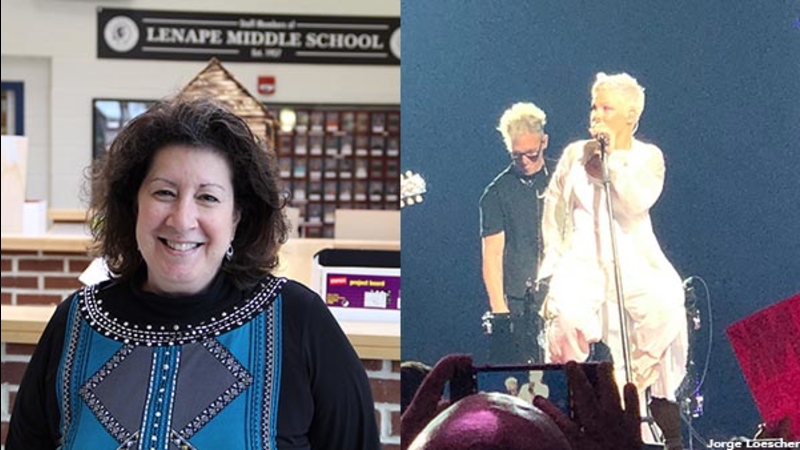 PHILADELPHIA (WPVI) -- Who knew that Lenape Middle School counselor Ann Kuntzmann was in attendance at the Wells Fargo Center on Friday night?

The Doylestown-native singer was on stage in front of her hometown crowd as part of her 'Beautiful Trauma' World Tour when her focus went to one particular woman - Ann Kuntzmann.

Decades ago, Kuntzmann was a teacher for an emotional support classroom, but realized she could help her students even more in a different capacity. Since 1989, she has been a counselor at Lenape in the Central Bucks School District.

"I always felt that these kids had a lot going on in their lives and what they needed was someone to talk to, rather than someone to cram curriculum down their throat. The mental and emotional health of the students needed to be addressed before the academic issues could be resolved. So I decided to go to school to become a school counselor, so I could spend my time talking with students to help them cope with the bigger things, and then be more ready to learn," Kuntzmann told Action News.

One student she made a connection with was Aleccia Moore.

"She was fiercely independent, a little defiant and clearly marched to her own drummer. Most of the time I spent with her was trying to intervene with teachers who were frustrated by her attitude, and help them understand her. We also talked a lot about family life and other stressors that are common among adolescents," Kuntzmann said.

Kuntzmann would go on to counsel hundreds of children, helping navigate their presents and while discussing their futures, as Moore would go on to become a pop music sensation known as Pink.

The guidance counselor, who remembers Pink resembling the schoolgirl she portrays in the 'Don't Let Me Get Me' video, has watched Moore's rise to stardom and could not be happier for her former student.

"It brings me to tears to see her living her dream. And I am inspired every day by the message she projects both through her music and via whatever platform is available to her," Kuntzmann said.

So when Kuntzmann found out Pink was returning to South Philadelphia, she knew she had to be there.

Though, she was not able to purchase tickets, they go fast, another student who stays in contact with Kuntzmann had an extra one for her.

The student, coincidentally, is also friends with Pink.

"The afternoon of the show, he messaged Alecia and told her I was coming with him. So I knew she was aware I would be there. But she has known that at other shows as well, so I had no reason to think anything was going to be special about this time," Kuntzmann said.

But it was a special moment as Pink figuratively raised her glass to her former guidance counselor.

According to the Central Bucks Education Association, Pink stopped the show, put the spotlight on Kuntzmann and thanked her for "being there for me at a time where it felt like nobody else was."

The guidance counselor was given a standing ovation by the thousands in the crowd.

"I was in such a state of shock, I only remember bits and pieces of what she said. Alecia thanked me for supporting her during a difficult time, when she didn't feel like there were many people in her corner. And she went on to say that all dysfunctional kids need someone like that in their life. I was really touched. We blew kisses at each other and I cried. I remember being surprised by the reaction of the crowd. It was so positive and supportive. Surreal is the best word I can use to describe it," Kuntzmann said.

The attention from Pink has led to Kuntzmann realizing her true impact on the students she's guided over the years.

"Since that night, the response from the entire Central Bucks Community has been incredible. I have heard from former students I haven't spoken to in more than 20 years. And the best part of this response is that it has all been positive. Alecia is such a supporter of positivity and good will, I think she would be thrilled to know that, of the thousands and thousands of comments I have read, every single one has been positive; not only about me, but about Alecia as well. As I said in an email recently, 'it has resulted in a love-fest the likes of which Central Bucks has never seen.' I think she would be pleased to know that she sparked such a positive outpouring," Kuntzmann said.

Pink, a three-time Grammy winner whose recent accolades include singing at Super Bowl LII, where her team the Philadelphia Eagles won it all, and being on the cover of People's Beautiful Issue, showed her public appreciation for Kuntzmann's hard work and dedication.

Willow Sage, 6, and Jameson Moon, 15 months, posed with their mom, Pink, for the cover of People's Beautiful Issue.

Kuntzmann herself is appreciative of the message Pink's words send about her profession and the change that can be made in a young person's life.

"I am thrilled to know that I was able to be a positive force in Alecia's young life. After all, isn't that why we become educators? To make a positive difference in the life of a child. But the bigger picture is that there are many, many other educators out there who impact children every day. Even though they may not have the opportunity to hear it from the children later on, they should know that they are all making a difference," Kuntzmann said.