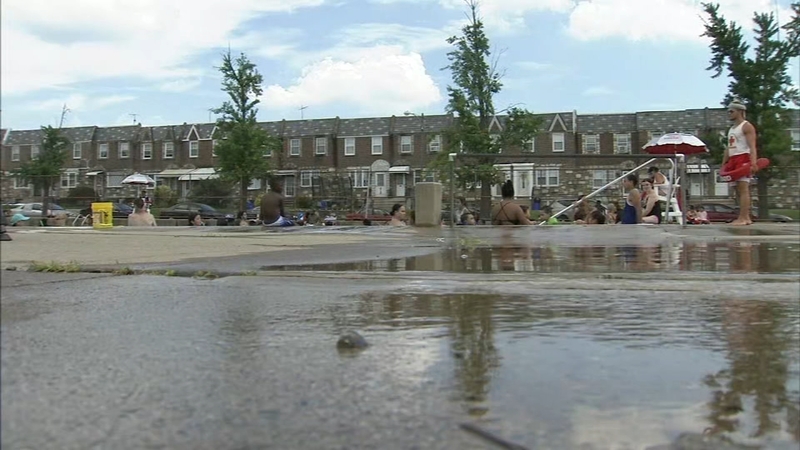 PHILADELPHIA (WPVI) -- Philadelphia police are investigating after they say a 19-year-old lifeguard and a 45-year-old man were attacked at a Mayfair pool on Monday.
It happened around 7:15 p.m. at the Vogt Recreation Center pool on the 4100 block of Unruh Street.

Detectives said surveillance video shows the 19-year-old lifeguard speaking to a child's mother who was suspended from the pool earlier in the day for using foul language.

Police said while the mother was contesting the suspension several additional family members came back to the pool and an altercation ensued.

Police said a woman sucker-punched the 19-year-old lifeguard in the face. She then ran into the recreation center.

Dolores Manai couldn't believe what happened at her neighborhood pool or the reason behind the assault.

"If a boy or a girl was doing something wrong and were put out of the pool, so what? You pay the consequences," said Manai.

According to authorities, a 45-year-old man saw her hurt and rushed out trying to intervene. He was punched and kicked by a separate group of teens.

The 19-year-old lifeguard was back on duty Tuesday.

The pool normally has school resource officers posted, but on Tuesday they stayed until closing due to Monday's incident.

The news of the attack was unsettling to people who live nearby.

"Growing up it was safe, many moons ago. Today I don't know anymore," said neighbor Michelle Colosino.

Neighbor Charles Tschopp said, "It's disturbing. You want the kids to have a good time, but at the same time, you don't want the lifeguards to get beat up like that. They're trying to keep the kids safe."

Police are continuing their investigation into the incident.