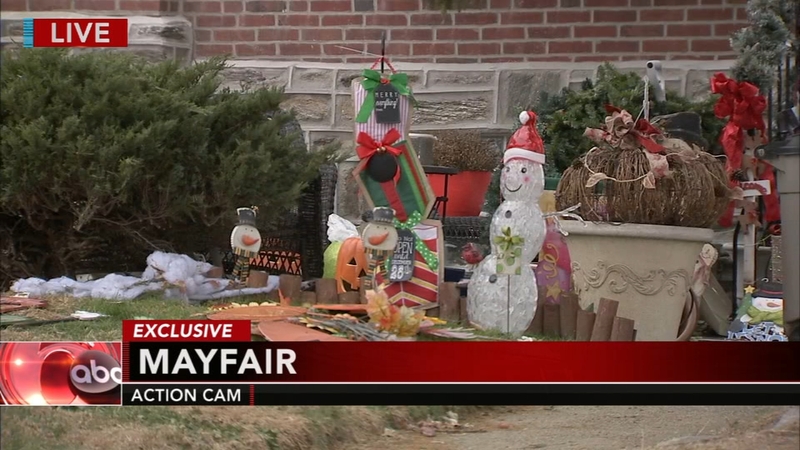 MAYFAIR (WPVI) -- A woman who police say has been stealing holiday decorations from her neighbors in Mayfair is now facing criminal charges.

The woman was confronted by police and, investigators say, has since confessed.

Residents tell Action News the neighborhood surrounding the 3100 block of Brighton Street had been decked with Christmas cheer just a few weeks ago.

But the ornaments were stripped and ended up at the suspect's home.

"The white deer were directly across the street from my house," said Danielle Adams. "The red bows are from... they went up with wire cutters and cut the bows off her railing."

A snowman, a polar bear, festive pumpkins: since Halloween, Jim Emme's home had been hit three times, decorations snatched from his front lawn.

And he wasn't alone.

"I took the whole day to put my decorations up, and I came home and they were missing," said Lisa Plunkett. "I was really upset. The Christmas spirit was lost."

Turns out, police say, one resident has been behind the multiple thefts of holiday decorations that left neighbors feeing deflated.

"It's a hard-working neighborhood," said Adams. "Everybody's middle class. Everybody's got a job. Everybody's taking care of their kids. So this Grinch is going to come in and steal?!"

Police learned of a video posted on social media that shows the woman stealing the items. On Thursday night the woman's identity was confirmed by a neighbor.

Police converged on the neighborhood, and officers were positioned outside her home overnight. They executed a search warrant.

As it got later, Action News saw neighbors and detectives carrying out lanterns and trees, lights and lawn ornaments.

"It's theft," said Philadelphia Police Lieutenant James Kearney. "She's going to be criminally charged. We'd like to return all the items to the rightful owners."

By Friday morning, signs, bows and garlands galore were visible out in front of the suspect's home. Inside there was even more.

"She's a hoarder," said Emme. "It's full of Halloween stuff, Christmas stuff... it's stuff laying all over."

Police are now working to see that all the items are returned to their rightful owners.
------
Send a breaking news alert to Action News
Report a correction or typo
Want to comment?
Learn more about the 6abc apps
Related topics:
northeast philadelphiaphiladelphia newstheftrobbery
Copyright © 2021 WPVI-TV. All Rights Reserved.
More Videos
From CNN Newsource affiliates
TOP STORIES