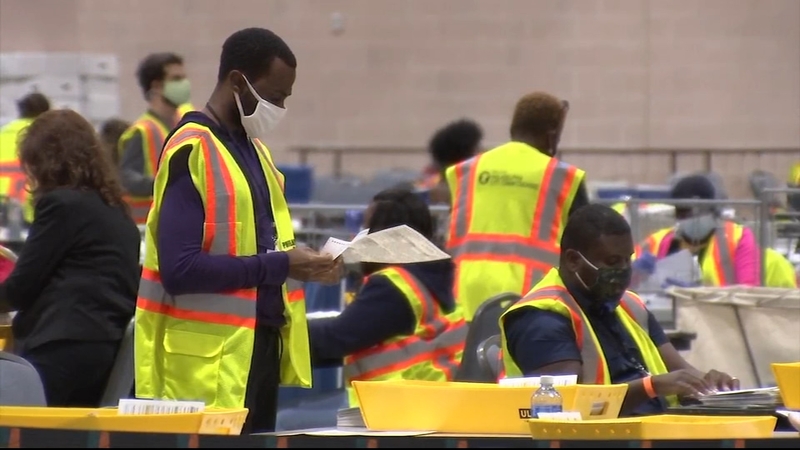 PHILADELPHIA -- After former Vice President Joe Biden appeared to trail President Trump by hundreds of thousands of votes in Pennsylvania on Election night, the days-long count of mail-in ballots reduced the president's lead to fewer than 20,000 by Thursday evening.

*95% of the total expected vote has been counted
*63 percent of the counted ballots are election-day ballots, and 37 percent are mail ballots.

* 76 percent of mail ballots counted so far are for Joe Biden.

* In Philadelphia, 358,644 absentee and mail-in ballots have been returned so far. 84 percent of those have been counted, and 58,642 more need to be counted.

* Results for other PA counties can be found here.

RELATED: Why is it taking so long to count votes? The answer is simple
EMBED More News Videos

The ballot counting operation continued inside the Pennsylvania Convention Center in Philadelphia on Thursday.

There was a brief pause in the morning after a judge ruled that ballot watchers could move closer to ballot counters and maintain a six-foot distance. The count resumed a short time later.

"We continue to feel very good about where things stand. We have no doubt that when the count is finished, Senator Harris and I will be declared the winners, so I ask everyone to stay calm ... the process is working."

Joe Biden addressed the nation Thursday afternoon, saying, "Each ballot must be counted." He added as votes in several battleground states continued to be counted: "Democracy is sometimes messy. It sometimes requires a little patience."

Pennsylvania, which holds 20 electoral votes, is one of the battleground states where the Trump campaign has launched a legal fight while ballot counting continues.
Outside the Convention Center, and in the middle of protesters, the Trump campaign vowed to fight on.

"They will not let us see anything. They're trying to drown us out right now, where we can't be heard. We're not going away," said former Florida Attorney General Pam Bondi.

Disputes over poll watchers were concentrated largely in Philadelphia, where the Trump campaign complained its observers could not get close enough to see whether mail-in ballot envelopes had signatures along with eligible voters' names and addresses. Ballots without that could be challenged or disqualified

But Pennsylvania Secretary of State Kathy Boockvar said the process is totally open.

"In Pennsylvania, every candidate and every political party is allowed to have an authorized representative in the room observing the process," Boockvar said in an interview with CNN. "Some jurisdictions including Philly are also livestreaming, so you can literally watch their counting process from anywhere in the world. It's very transparent."

Ahead of the election, the United States Supreme Court declined to block the Pennsylvania mail-in ballot extension.

In the meantime, ballots postmarked Election Day, that arrive by Friday at 5 p.m., will be counted. In anticipation of a court battle, ballot counters are separating mail-in votes that arrived after Tuesday.

The unprecedented amount of mail-in votes and the tedious nature of counting them has Philadelphia election officials calling on the public to be patient.

RELATED: A look at the electoral college in the 2020 election
EMBED More News Videos

On Wednesday, the bipartisan panel of commissioners in Philadelphia reiterated they want the count done right and with transparency.

Fears that every vote won't be counted sparked a protest Wednesday night at City Hall, just one block from the Convention Center where the votes are being counted.

"This is what you see when people fear that their rights are being taken away from them," said Rich Garella of Protect Our Vote Philly as he surveyed the crowd of protesters emphatically chanting, "Count every vote."