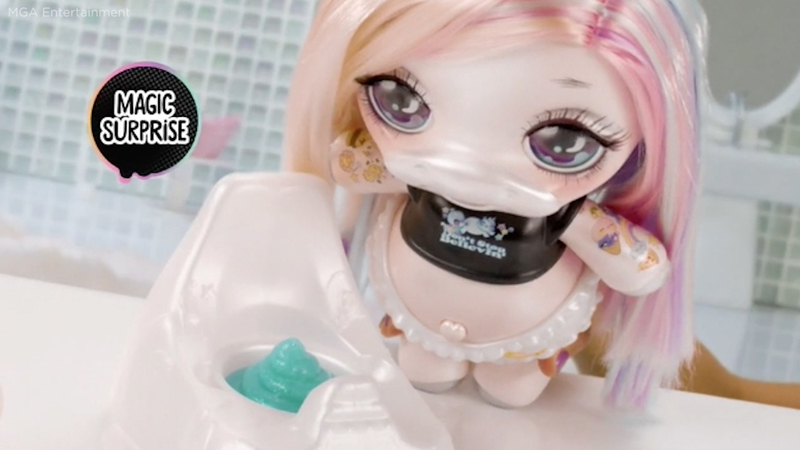 Forget Hatchimals, one of this year's must-have holiday gifts is -- oddly enough -- a $50 toy unicorn designed to leave behind a glittery, gooey surprise in a tiny plastic toilet.

Aptly named Poopsie, the line of defecating unicorns has been hailed by some as the hottest holiday toy of 2018 and panned by others: The Washington Post called Poopsie "the perfect representation of what it is to be a toy in 2018."

The rainbow-haired unicorn comes with a diaper, a hefty supply of "unicorn food" and feces-themed accessories like a poop emoji keychain named Doodie.

An unboxing video from manufacturer MGA shows just how the toy works: Kids feed Poopsie a meal of "unicorn shimmer" followed by a bottled concoction containing water and "unicorn food" mixed in a cheeky plastic bottle labeled with a large number 2.

Poopsie next must be shaken, seemingly to mix the ingredients in her stomach, at which point her diaper is removed, she's placed on her plastic potty and her heart-shaped belly button is pushed.

When removed from her potty, Poopsie leaves behind a glittery lump of "unicorn slime" that becomes a toy in and of itself. Kids can customize their unicorn feces by adding additional sparkle and shimmer powder that they then must mix by hand. An optional Pooey Puitton purse of accessories offers even more ways to customize the slime.

"After we saw what happened with Toys 'R' Us, we said, 'Okay, well, the whole toy business is going to the poops,'" MGA Entertainment founder Isaac Larian told Yahoo News. "We wanted to bring some laughter, some parody, some fun to this business, and that's why it's successful."

Unlike Hatchimals and other hot holiday toys that all but disappeared from toy stores in the weeks leading up to Christmas, Poopsie still appears to be readily available online from Target, Amazon, Walmart and other retailers as of Saturday, Dec. 15.

Though she might not have sold out completely, Poopsie certainly has made a name for herself on the internet. Various unboxing videos posted by MGA have racked up more than 20 million views, though the toy's premise has been the subject of ridicule on social media.

"Capitalism continues to impress by reaching new lows," remarked one user on Twitter who said that even her 11-year-old was grossed out by Poopsie.

"Nothing weird about this at all," Sara Veldhuizen Stealy tweeted as she tried to feed her own Poopsie, later adding that something had "gone horribly wrong" in her quest to make unicorn slime.