'I don't want this to continue': Alleged R. Kelly victim speaks out in Los Angeles 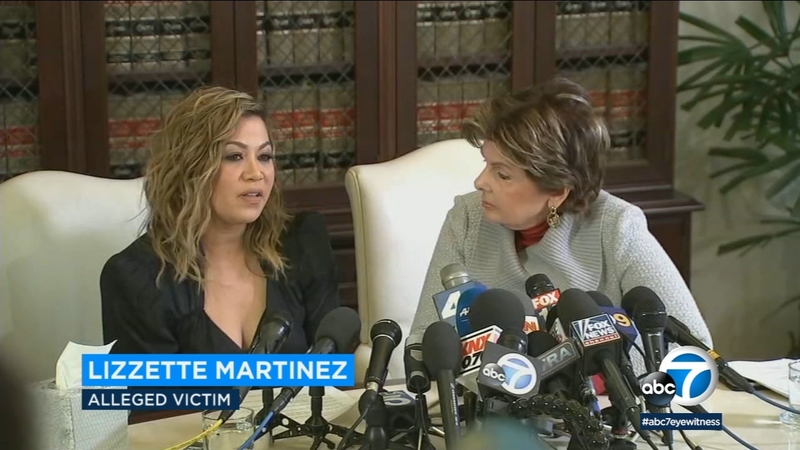 LOS ANGELES -- Attorney Gloria Allred held a press conference with yet another alleged victim of singer R. Kelly in Los Angeles on Monday.

The alleged victim, now a 41-year-old mother, said she's speaking out because she wants to support the four women accusing Kelly of aggravated sexual abuse in the case now underway in Chicago.

Lizzette Martinez is also coming forward to let authorities know she is willing to talk to investigators.

Appearing with Allred by her side, Martinez explained it was Kelly's attorney's recent comment -- that "all the women (in the case) are liars" -- that prompted her to speak out publicly.

"It's ludicrous. The only person that's lying, like I said before, is Robert Sylvester Kelly, and he's been doing that for a very long time," Martinez said.

These are Martinez's first public statements since Kelly was charged with 10 counts of aggravated sexual abuse. Previously, Martinez appeared in the Lifetime documentary "Surviving R. Kelly," during which she revealed the details of her alleged abuse.

Martinez said she met Kelly for the first time in a mall in Miami when she was 17 years old and that she had a four-year relationship with him. Asked whether she knew of other victims at the time, she said yes.

"I'm a mom and I have a daughter, and I felt like I had to be transparent and vocal about what happened to me to save others," she said. "I was hurt as a young girl, and I don't want this to continue to happen to anyone else."

Allred said the singer must face what's in front of him.