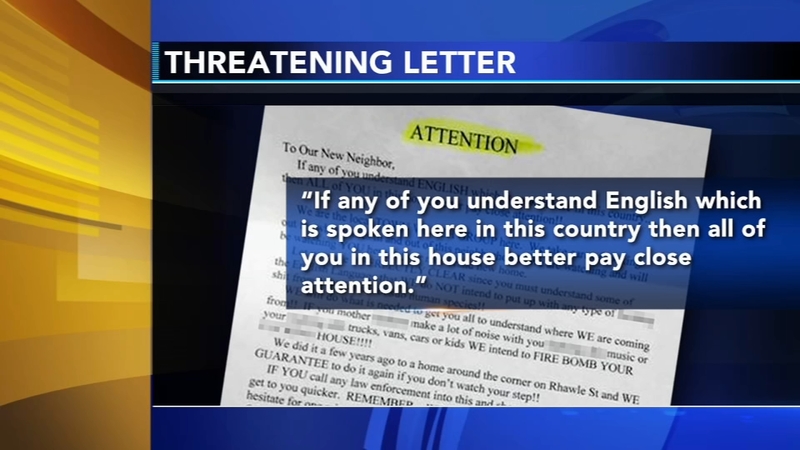 PHILADELPHIA (WPVI) -- An investigation is underway into a disturbing letter found outside a home in the Tacony section of Philadelphia.

The note not only used racial slurs: it threatened the family who lives there.

Connie Mella is a Dominican who just moved into her new home two months ago.

She lives there with her mom, husband and 7-year-old daughter. She worked hard to save money and have it remodeled.

But on Thursday, in the mailbox outside that home, she found an extremely hurtful letter inside.

"She don't know, she don't know what to say," said Mella's son, who translated for her. "She waited so long to get her house and this is how they welcomed her to the neighborhood."

Once she understood the hateful contents, she panicked.

"As soon as she called her husband, he told her to calm down take it easy, go to the police station and make a report," said Mella's son.

The letter is addressed "to our new neighbor."

It starts off by saying "If any of you understand English, which is spoken here in this country, then all of you in this house better pay close attention."

It goes on: "We do not intend to put up with any type of (expletive) (expletive) from your kind of sub-human species."

Then it turns violent stating: "If you make a lot of noise with your music, your trucks, vans, cars or kids we intend to firebomb your house."

Since she filed a report, detectives have taken the original letter to check for evidence, including fingerprints.

There was also a heightened police presence in the neighborhood on Friday.

Through it all, some of the neighbors we spoke to have Mella's back.

"I've never had any problems with them. I think who ever sent it is a coward," said Carl Wilson.

"There's no excuse for it. There's been no problems," said Juliette Underwood.