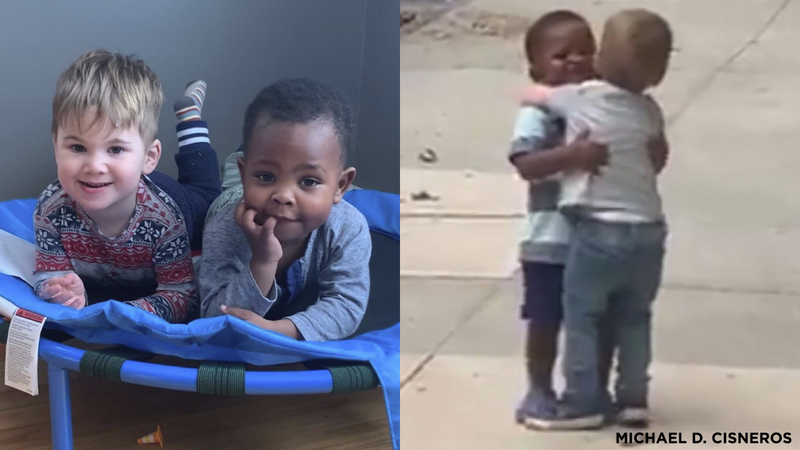 NEW YORK -- The parents of the boys seen in President Donald Trump's now-flagged "racist baby" tweet are speaking out, saying they were "appalled" and "disgusted" by the portrayal of their young sons.

The doctored clip, which Twitter removed from its platform and flagged as "manipulated media," used footage from a video that went viral last year of two toddlers: Maxwell, who is Black, and Finnegan, who is white. This station used the video last year for a story on the boys' friendship.

The video Trump shared begins with footage of the boys running set to ominous music, with a fake misspelled CNN caption reading, "Terrified todler runs from racist baby." Then it cuts to other footage from the original video of the boys excitedly running to each other and hugging, which formed the basis of the original CNN story, before showing the message, "America is not the problem. Fake news is."

Uneditted video of toddler 'besties' running toward each other, hugging in NYC
EMBED More News Videos

Two toddlers in New York City are warming hearts all over Facebook after one dad posted a video of these two "besties."

In real life, Maxwell and Finnegan are best friends and greet each other with hugs "all the time," said Michael Cisneros, Maxwell's father.

Both Cisneros and Finnegan's father Daniel McKenna are speaking out, upset by the president's portrayal of their sons.

"We were appalled and disgusted to see it be used in that manner again. We are trying to do everything we can to change the thoughts and the way people raise their children," Cisneros said.

"Finnegan knows that Maxwell is Black and he's white, but it doesn't matter to him," McKenna added.

"I think the president was making a satirical point that was quite funny if you go and actually watch the video," she said.

But the families are not amused, calling the manipulated video "propaganda."

"These two families have done a phenomenal job of spreading love and acceptance and unity, and then when someone goes online and steals that and then twists it ... to try to shed a negative light on what is otherwise this positive, warm message -- there have to be ramifications," said Ven Johnson, an attorney representing the families.